In his meeting with His Majesty Sultan Haitham, the foreign minister conveyed special messages from President Dr Arif Alvi and Prime Minister Imran Khan, stressing that the Pakistani nation fully shared the grief and sorrow of the brotherly people of Oman on this irreparable loss. 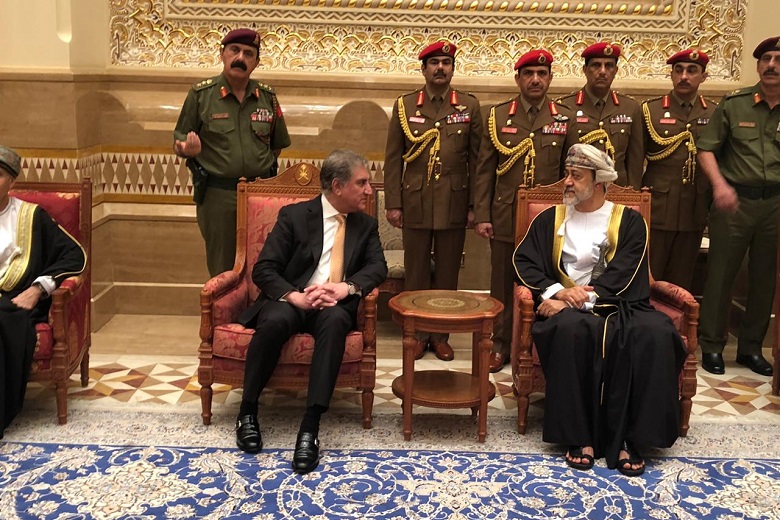 The 79-year-old Qaboos bin Said al Said passed away on January 11 after protracted illness in Oman.

The foreign minister stated that with the passing away of Sultan Qaboos, Oman has lost a wise and sagacious ruler and a visionary leader, who transformed the Country into a modern, vibrant and prosperous state. His contributions to the cause of peace, stability and security in the region will be long remembered.

His Majesty Sultan Haitham expressed sincere thanks to the leadership and people of Pakistan on the gesture of foreign minister’s special visit to Muscat to offer condolences.

Noting the long-standing fraternal ties between Oman and Pakistan, Sultan Haitham affirmed that these relations will continue to flourish in the time to come.

Earlier, the Foreign Minister Shah Mahmood Qureshi reached Oman, where he was received by Pakistan’s Ambassador to Muscat Ahsan K.K. Wagan and other officials of Omani Foreign Ministry at the Muscat International Airport.

Qureshi reached Muscat directly from Saudi Arabia wherein he met the Saudi Foreign Minister His Highness Prince Faisal bin Farhan Al Saud and had an in-depth exchange of views on recent developments in the Middle East.

Mati
Mati-Ullah is the Online Editor For DND. He is the real man to handle the team around the Country and get news from them and provide to you instantly.
Share
Facebook
Twitter
Pinterest
WhatsApp
Previous articleGovernment allies are united, opposition to face disappointment: Dr Firdous
Next articleTECNO’s Record-breaking Sale in 2019