The International Cricket Council (ICC) has announced the schedule of the upcoming Men’s T20 World Cup 2021, according to which, two arch-rivals Pakistan and India will lock horn at Dubai on October 24.

The event will take place at United Arab Emirates (UAE) and Oman from October 17 to November 14, 2021.

Prior to the main Super 12 round, the qualifying round among 8 teams including Oman, Papua New Guinea, Scotland, Bangladesh, Ireland, Netherlands, Sri Lanka and Namibia will be played till October 22.

From the qualifying round, four teams will proceed to the Super 12 round which will begin on October 23 with the match between Australia and South Africa at Sheikh Zayed Cricket Stadium in Abu Dhabi.

The participating teams in the Super 12 round have been divided into two groups – Group 1 and Group 2.

The Group 1 includes Australia, South Africa, England, West Indies, and two qualifiers teams while the Group 2 will have Pakistan, India, New Zealand, Afghanistan, and two teams approaching from the qualifying round. 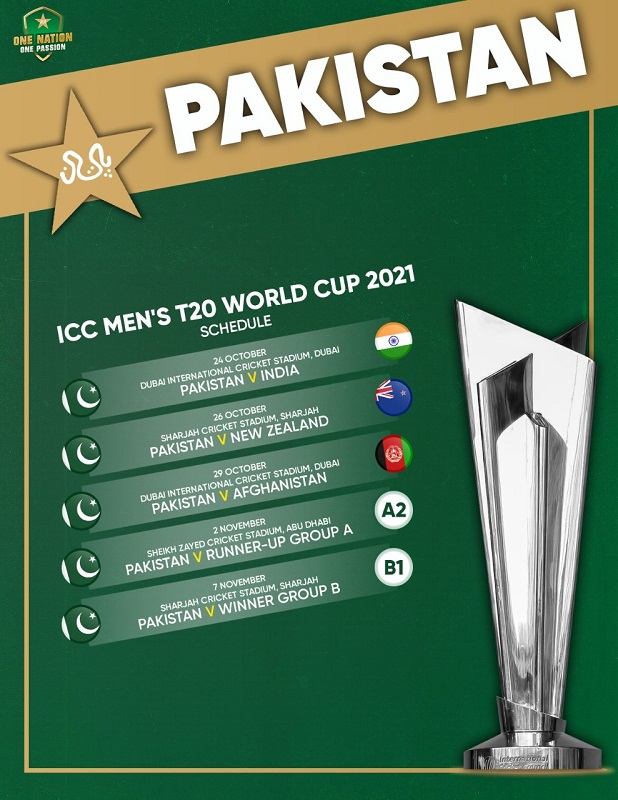 Pakistan will kick off its ICC Men’s T20 World Cup 2021 Campaign with the match against India at Dubai International Cricket Stadium on October 24.

All matches of Pakistan will begin at 07:00 pm as per Pakistan Standard Time (PST).

The first Semi-Final of the ICC Men’s T20 World Cup 2021 will be played on November 10 and the second on the following day. The Final will take place on November 14.