FeaturedSenate of Pakistan
By Mati
October 7, 2022

ISLAMABAD, Pakistan: The Senate was informed on Friday that there has been an overall a comparative rise in terrorism incidents in Pakistan, mostly in Khyber Pakhtunkhwa and Balochistan.

Replying to a question by Senator Seemee Ezdi, the Minister for Interior Rana Sana Ullah Khan told the House that Pakistan is currently facing a new wave of terrorism.

The interior minister told that there is an overall a comparative rise in terrorism incidents, adding that most of the incidents are reported in border adjacent areas of Khyber Pakhtunkhwa and Balochistan.

Out of them, 307 incidents occurred in Khyber Pakhtunkhwa, 189 in KPK, 12 in Sindh, 3 in Islamabad Capital Territory (ICT), and 3 in Punjab. 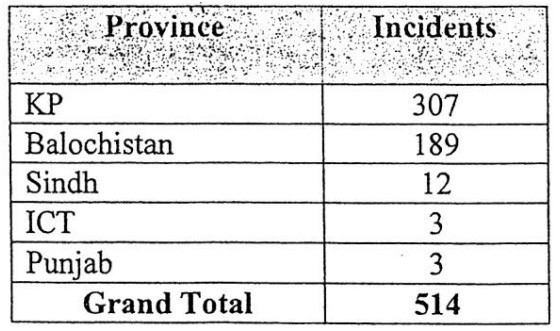 The minister also apprised the following reasons for increase in attacks;

Mati
Mati-Ullah is the Online Editor For DND. He is the real man to handle the team around the Country and get news from them and provide to you instantly.
Share
Facebook
Twitter
Pinterest
WhatsApp
Previous article
Pakistan Maritime Security Agency saves lives of Indian fishermen at sea
Next article
Ishaq Dar reiterates govt’s desire to further deepen bilateral trade & investment ties with US
Share
Facebook
Twitter
Pinterest
WhatsApp