ISLAMABAD, Pakistan: The Federal Minister for Education and Professional Training Shafqat Mahmood on Monday said that Pakistan would like to learn from the experiences of China who in spite of huge youth population, different languages and multiple ethnicities introduced uniform education system.

“We would also like the support of China in guiding us on skill and human development”, the minister said while talking to a Chinese delegation led by China’s Ambassador to Pakistan Yao Jing in Islamabad.

Shafqat Mahmood said that Pakistan is facing myriad challenges in education sector and among them are; bringing the 2.5 million out of school children to schools, establishing a uniform education system and curriculum, ensuring quality education and working on the skill development.

“I am here to implement the vision of Imran Khan regarding the education uplift of Pakistan and translate that vision into a reality”, the minister said.

The education minister said that education though is a devolved subject but we will take a leadership role, work on the policy framework and will introduce uniform standards and certification in education system.

“We will provide all out support to the provinces, will facilitate and coordinate with them to enable them to introduce the changes in education system in provinces purely in national interest and bright future of our entire youth,” Shafqat Mahmood added. 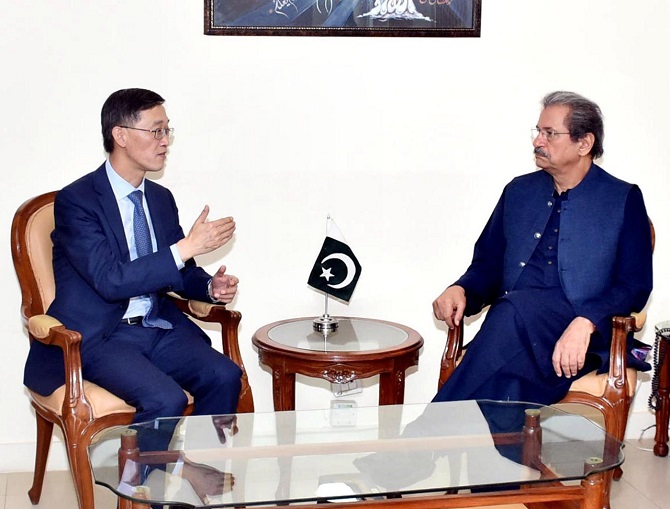 The minister told the Chinese delegation that a national task force on heritage is working to look at the heritage buildings and to devise a strategy for them to put them to a better use.

“We will do a heritage audit and analysis of all our national heritage sites and buildings to assess their current condition and will invest in these sites to turn them into greatest tourist attractions.”

“Pakistan has some of the best heritage sites that if properly developed will become a source of attraction for tourists all around the globe,” the minister said.

The Chinese ambassador appreciated the present government’s steps for education and ensured their full support.

It will be executed as per the wishes of the government and people of Pakistan but our focus for social aspect will be more on Balochistan, Khyber Pakhtunkhwa and other such areas, added Yao Jing.

“It may include building schools infrastructure, health facilities, providing more and more scholarships to the Pakistani students and providing skill development trainings,” he added.

Both sides agreed to stay in regular contact and to hold further meetings for the promotion of education.

Mati
Mati-Ullah is the Online Editor For DND. He is the real man to handle the team around the Country and get news from them and provide to you instantly.
Share
Facebook
Twitter
Pinterest
WhatsApp
Previous articleProject Launch: Saving Lives of Women and Girls in Cross Border Areas in Pakistan
Next articlePTI tables motion in NA for formation of Commission to inquire election rigging