Pakistan Cricket Team has reached Nelson to take on New Zealand in second One Day International (ODI) being playing on Tuesday.

The team led by Sarfraz Ahmed is practising for the next ODI, hoping that better strategy and adopting the New Zealand’s conditions quickly will help them bounce back in the five-match series.

New Zealand is leading the series 1-0 after it comfortably beaten Pakistan in rain-effected first ODI in wellington.

Except Fakhar Zaman, all Pakistani players failed to justify their ability, and bowlers as well batsmen seemed struggling to adjust with the conditions in the inaugural match.

In addition, a drop catch of New Zealand’s Captain Kane Williamson by his Counterpart behind the wicket Sarfraz Ahmed also proved costly for Pakistan as the former eventually ended his innings for 115.

Though Sarfraz won the toss and opted for bowling but it couldn’t be grabbed as an opportunity. New Zealand while batting first put a decent 315 score on the board, asking most-of-the-time staggering Pakistani batting lineup for an uphill task especially when it was the very first game of the tour.

Subsequently with Kane Williamson’s 115 and Henry Nicholls’ 50 runs, New Zealand ended its inning with 315 for 7 in stipulated 50 overs. For Pakistan, Hasan Ali topped the bowling Chart with 3 wickets. 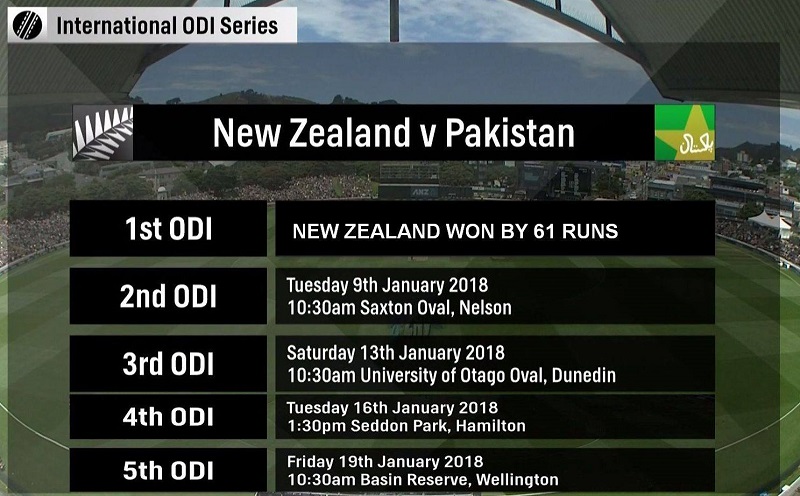 Unlike New Zealand, Pakistan began a shaky start, and Azhar Ali and Babar Azam returned to pavilion in the very first over of Tim Southee. Pakistan had lost its five top batsmen including Sarfraz Ahmed for just 54 runs. But Fakhar Zaman continued his excellent form – he generated in Tour Match against New Zealand XI – and with the help of Shadab Khan and Faheem Ashraf took Pakistan’s score to 166 for 6 in 30.1 overs before the rain’s interruption forced the umpires to abandon the game. Fakhar Zaman remained not out on 82 runs with 4 sixes.

Eventually, New Zealand was declared the winner of the first ODI by 61 runs under D/L method.

Mati
Mati-Ullah is the Online Editor For DND. He is the real man to handle the team around the Country and get news from them and provide to you instantly.
Share
Facebook
Twitter
Pinterest
WhatsApp
Previous articleMinorities have equal rights in Pakistan: Khaqan Abbasi
Next articleElectricity prices to be decreased, hopes PM Khaqan