RAWALPINDI, Pakistan: The Chief of Army Staff (COAS) General Qamar Javed Bajwa on Monday reiterated Pakistan’s commitment for peace and stability in the region particularly in Afghanistan through a national approach.

However, he said that Pakistan also expects other players in the region to play equally positive part.

The COAS made these remarks in a meeting with the Acting Assistant Secretary of State for South and Central Asian Affairs Ambassador Alice G. Wells who visited the army’s general headquarters in Rawalpindi today and meet him. 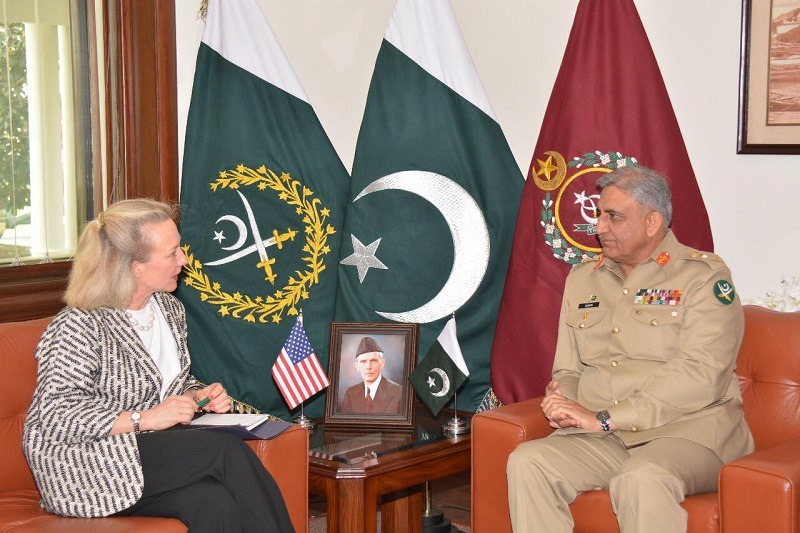 In a statement issued in Rawalpindi, the Inter Services Public Relations (ISPR) said that regional security environment and matters of mutual interest were discussed during the meeting.

Alice Wells said that the United States is committed to lasting peace and supports all efforts towards that end.

Both the dignitaries agreed that bilateral convergences should be leveraged to gain positive momentum rather than remaining hostage to perceptions.

Mati
Mati-Ullah is the Online Editor For DND. He is the real man to handle the team around the Country and get news from them and provide to you instantly.
Share
Facebook
Twitter
Pinterest
WhatsApp
Previous articleCOAS confirms death sentences for 10 terrorists including Amjad Sabri’s killers
Next articleIndia can never suppress Kashmiris’ struggle for self-determination: Army Chief