WASHINGTON: Pakistan’s Ambassador to the United States Masood Khan met the Chairman of the US Senate Armed Services Committee Senator Jack Reed at the Senate Hart Building in Washington DC.

Senator Jack Reed has held several leadership positions in the Senate for the past two decades and now leads the powerful Armed Services Committee and is a member of the Intelligence, Appropriations and Banking Committees. In the past, he has visited Pakistan many times. 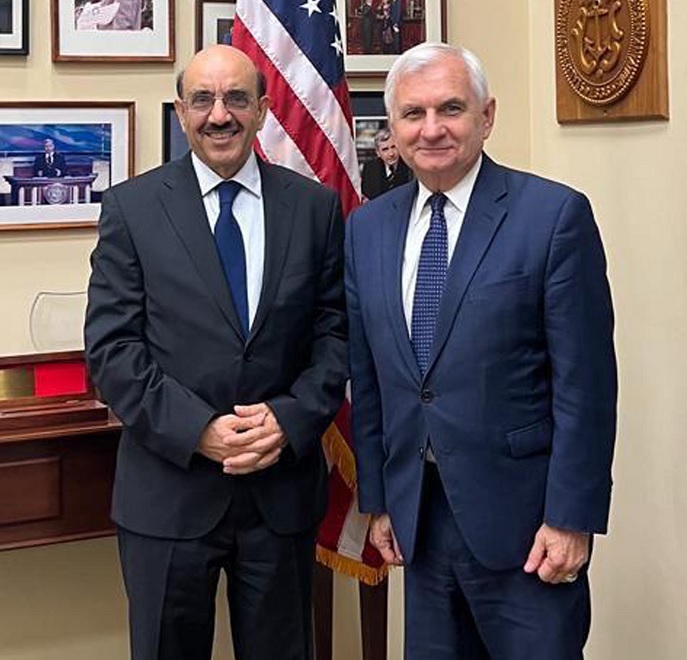 Masood Khan briefed the Senator about the situation of regional security and Afghanistan including the latest efforts to create conditions for stability and prosperity in the neighborhood.

The Ambassador said that economic viability and development were utmost priorities for Pakistan. The engagement with the US had opened new channels and both sides were working to reinforce long-standing broad-based ties between the two Countries spanning more than seven decades.

Ambassador Khan said that Pakistan and the US have enjoyed close defense cooperation in the past and would like to build on their existing security bonds. He emphasized that many of the defense platforms used by Pakistan were American which required sustained support. New avenues could also be explored, he said.

“Our armed forces have coordinated in the past. Our two countries would continue to partner with each other in political and economic spheres”, he said.

The Senator welcomed the Ambassador warmly and expressed the confidence that the long-standing ties between Pakistan and the US would continue to grow as the two Countries celebrate the 75th anniversary of their diplomatic relations.

The Armed Services Committee, he said, would engage with Pakistan to bolster bilateral relations between the two Countries.

The Ambassador extended an invitation to the Senator to visit Pakistan which he accepted gladly.

Mati
Mati-Ullah is the Online Editor For DND. He is the real man to handle the team around the Country and get news from them and provide to you instantly.
Share
Facebook
Twitter
Pinterest
WhatsApp
Previous articleNHMP returns overcharged money to passengers
Next article5 Mouthwatering Eid-ul-Adha Recipes 2022