Kyiv, Ukraine: The Embassy of Pakistan in Kyiv, Ukraine observed October 27, the day when Indian forces illegally annexed Kashmir, as Black Day to express solidarity with Kashmiri brethren and highlight the atrocities being committed by India against the innocent Kashmiris in the Indian Occupied Jammu & Kashmir (IOJ&K).

According to a press statement issued by Embassy, the event started with recitation of the Holy Quran. Afterwards, the messages of President Dr. Arif Alvi and Prime Minister Imran Khan were read out on this occasion.

The Ambassador Maj. Gen. (Retd) Zahid Mubashir Sheikh, while addressing the audience, highlighted the grave human rights violations and the reign of tyranny, especially in the aftermath of revoking of article 370 and 35A, being imposed on the innocent Kashmiris by the Indian Occupation Forces.
He added that, fearing severe response from the Kashmiris against the revocation of the special status of Kashmir on 5th August 2019, India increased the level of security forces to an all time high. Now the 8 million Kashmiris are literally imprisoned by a million Indian occupation forces which have turned the valley into the biggest prison in the world. India has imposed a 24 hours curfew, restricted all types of communications and there is a complete lock-down of the IOJ&K for the last three months.

He further informed that these measures are causing immense suffering to the Kashmiri people especially women, children, the elderly and sick. The Indian government’s actions have resulted in the shortage food and medicine in the IOJ&K. The people are unable to go to work and children unable to attend their school. Nearly 13,000 Kashmiris have been detained. People’s rights to peaceful assembly, free movement, and observance of religious obligations are being trampled upon. The Indian rule of tyranny is unfolding an unimaginable level of human catastrophe in the IOJ&K. 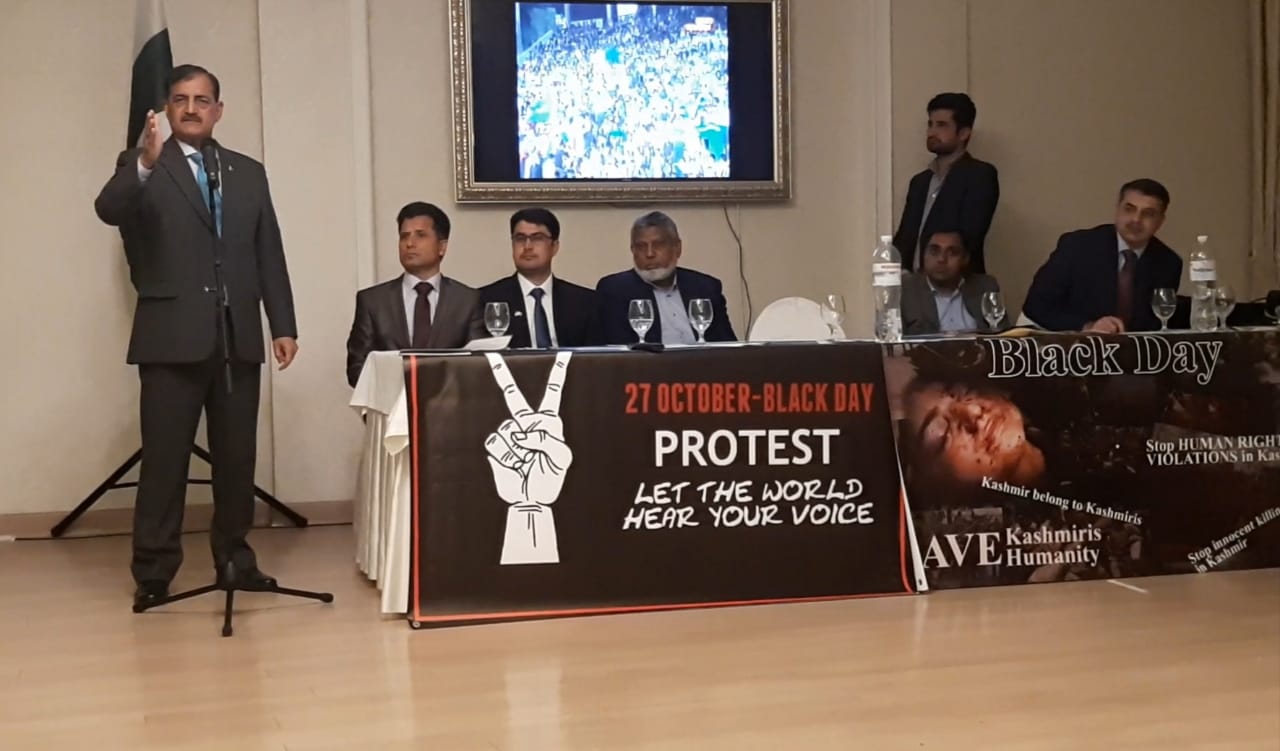 The Ambassador expressed that due to Pakistan’s active diplomacy and support of international community, the issue of IOJ&K was once again raised and discussed in the UN Security Council on August 16, 2019, which once again supported Pakistan’s claim that IOJ&K is a dispute, on the agenda of the UN, to be resolved as per the wishes of Kashmiris and UNSC resolutions. The world has taken notice of the Indian atrocities and human rights violations in the IOJ&K. The UN Secretary General, UN High Commissioner for Human Rights, Amnesty International, the Parliament of European Union and OIC have expressed deep concern over the human rights violations in Kashmir and have called on India to lift curfew, remove communication blackout, respect and protect human rights of the Kashmiri people.

The Ambassador added that more recently, the issue of IOJ&K was also raised during the hearing of the US House sub-committee on Asia and Pacific on October 23, 2019. The US Congressional Panel observed that IOJ&K is facing a humanitarian crisis and India’s August 05 decision to annex the disputed territory has been a disaster for Kashmiris. 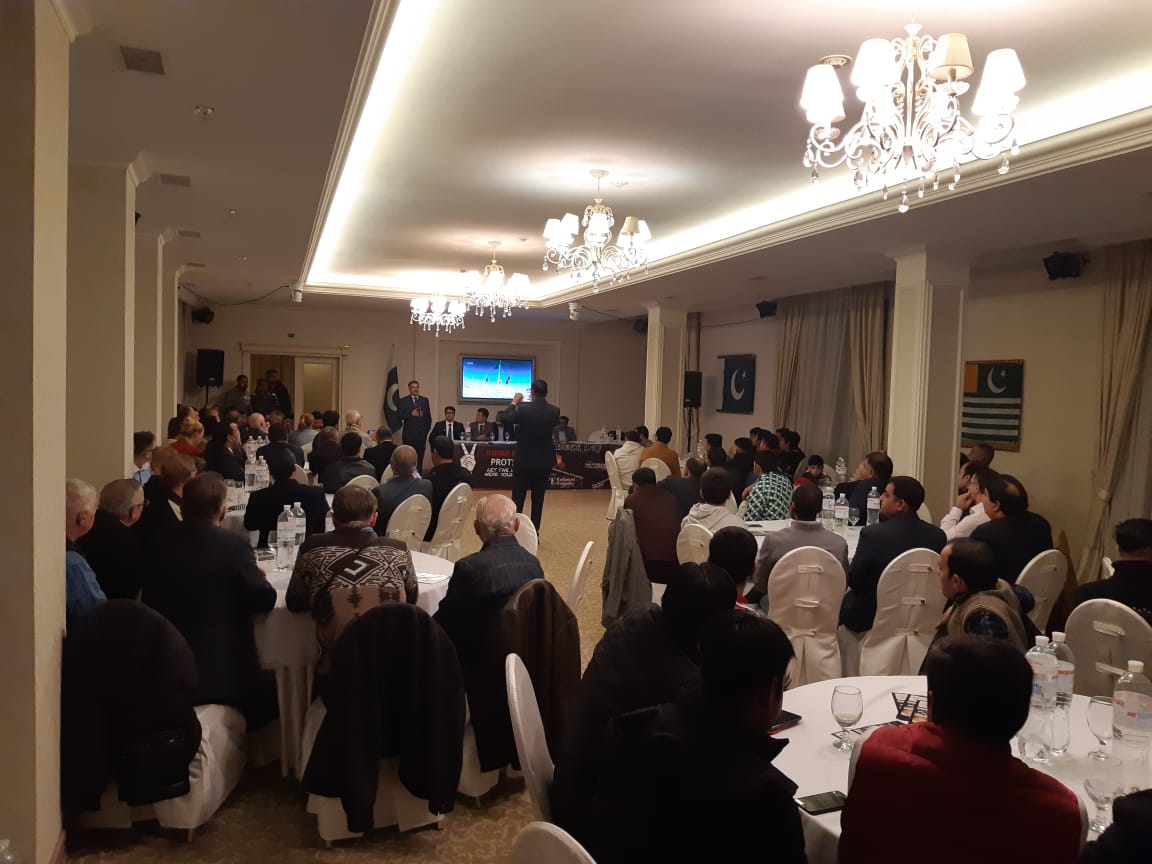 It was further added the Government of Pakistan condemns the illegal, unilateral, reckless and coercive attempt by India to alter the disputed status of IOJ&K as enshrined in the UNSC Resolutions. Pakistan will continue to provide moral, diplomatic and political support to the Kashmiri people till the fate of IOJ&K is decided according to the UNSC resolutions and wishes of its people.
The Ambassador also stressed upon all Pakistani community members to play their due part in highlighting, condemning and raising voice against the grave human right violations being perpetrated by the Indian Occupation Forces in IOJ&K. We should not turn a blind eye to atrocities of the Indian occupation forces and speak against their tyrannical actions to help our Kashmiri brethren in getting their due right of self-determination.
Pakistani Community Leaders and a Kashmiri also spoke on the occasion, highlighting the human rights abuses in the IOJ&K. They vowed to continue to support the Kashmiri people in their just struggle until they achieve their long cherished goal of freedom of IOJ&K.
A number of documentaries highlighting the serious human rights violations in the IOJ&K were played. Banners, posters and panaflexes showing the atrocities against Kashmiris were displayed at the venue. A pictorial presentation about the ongoing brutalities of the Indian forces against the innocent Kashmiris in the IOJ&K was also shown to the audience. The event was attended by Pakistani community members and Ukrainian media persons.