RAWALPINDI, Pakistan: Pakistan and Egyptian armed forces have agreed to improve their bilateral cooperation for regional peace and stability.

In a meeting held in Cairo, the Chief of Army Staff (COAS) General Qamar Javed Bajwa and the Commander in Chief of Egyptian Armed Forces and Minister of Defence & Military Production General Mohamed Zaki agreed to increase Pakistan-Egypt cooperation in multiple fields including joint ventures, defence production, training and intelligence. 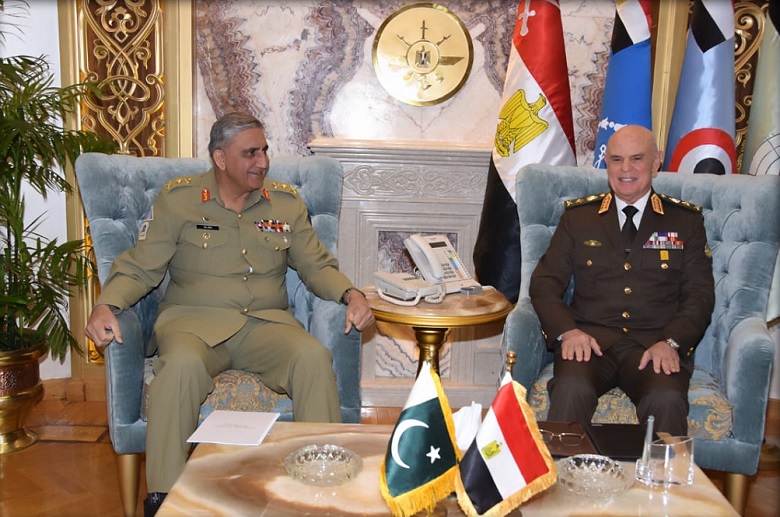 During both the meetings, matters of mutual interest, military to military relations, and Pakistan-Egypt cooperation in defence & security sectors were discussed.

The Egyptian leadership highly appreciated the professionalism of Pakistan army and the determination of the Pakistani nation in combating terrorism.

Grand Sheikh commended the efforts of Pakistan Army in eliminating the scourge of terrorism from the Country. He also appreciated issuance of ‘Paigham-e-Pakistan’ Fatwa on the issues arising from extremism by religious scholars of all schools of thoughts of Pakistan.

Sheikh Ahmed Al-Tayeb added that Islam is a religion of moderation and a complete code of conduct, which must not be linked with terrorism/extremism in the global community.

Earlier on his arrival, a smartly turned out contingent of the Egyptian army presented the guard of honour to the COAS at the Ministry of Defence.

Mati
Mati-Ullah is the Online Editor For DND. He is the real man to handle the team around the Country and get news from them and provide to you instantly.
Share
Facebook
Twitter
Pinterest
WhatsApp
Previous articleInfinix’s “Beyond Intelligent” Campaign stands out to win silver award by MEPRA
Next articlePakistan releases Indian Spy Hamid Nehal Ansari