Pakistan Economic Survey 2017-18 at a glance

The Pakistan Muslim League-Nawaz (PML-N)-led federal government is presenting its sixth consecutive budget for the next financial year 2018-19 in the National Assembly on Friday (April 27, 2018) with an estimated outlay of over Rs 5 trillion.

The newly-appointed Federal Minister for Finance Miftah Ismail will deliver the budget speech.

For the first time in the history of Pakistan, a federal government will present sixth consecutive budget during its five-year tenure.

It has been decided to increase prices of cigarette, cement and cosmetic items. It has also been decided to decrease tax rate on import and supply of liquefied natural gas (LNG).

Papers being used for printing of The Holy Quran will be exempted from tax. 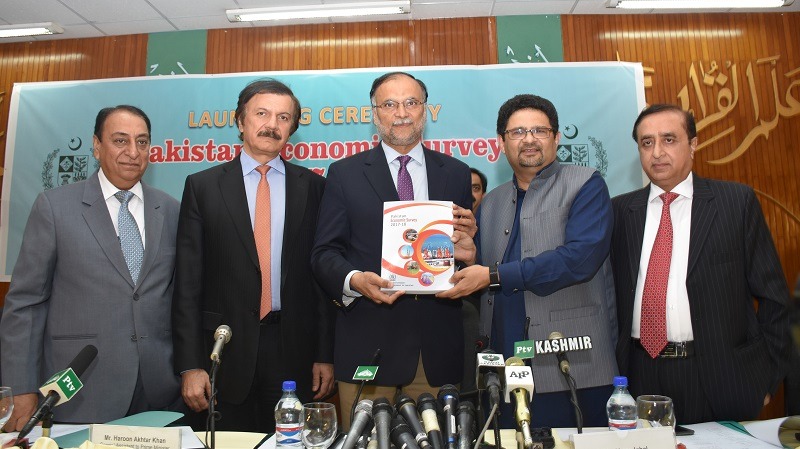 Meanwhile, the government on Thursday launched the Economic Survey 2017-18 in Islamabad, in which the Minister of Planning and Development Ahsan Iqbal said that the Country’s growth rate has reached 5.8 percent, the highest in last 13 years.

Miftah Ismail, while giving figures of growth in different sectors in the outgoing financial year, said that agriculture sector grew by 3.8 percent, manufacturing 5.8 percent, services 6.4 percent and large scale manufacturing by 6.25 percent. He said that current budget deficit is 5.5 percent.

The advisor said that inflation rate remained low during the tenure of the PML-N government, and at present it stands at 3.8 percent which is expected to remain under 4.5 percent by the end of current financial year.

Mati
Mati-Ullah is the Online Editor For DND. He is the real man to handle the team around the Country and get news from them and provide to you instantly.
Share
Facebook
Twitter
Pinterest
WhatsApp
Previous articleIX International Meeting of High-Level Officials Responsible for Security Matters held in Sochi concluded with node that unilateral use of force in resolving conflicts must be stopped
Next articleKhursheed Shah unhappy over Khawaja Asif’s disqualification, says Parliament should make its decisions itself