FeaturedGovernment of Pakistan
By Mati
December 30, 2020

ISLAMABAD, Pakistan: Pakistan and Djibouti have reiterated their desire to strengthen bilateral cooperation in the areas of commerce, culture, and defense.

This was discussed at a meeting between President Dr. Arif Alvi and the visiting Djibouti Parliamentary delegation led by the President of the National Parliament of Djibouti and the acting-Chairman of African Union Parliament Mohamed Ali Houmed at Aiwan-e-Sadr in Islamabad on Wednesday.

While welcoming the delegation, the president said that Pakistan and Djibouti enjoy excellent relations, and Pakistan wants to further improve defense and economic ties with Djibouti for the mutual benefit of the two brotherly Countries. 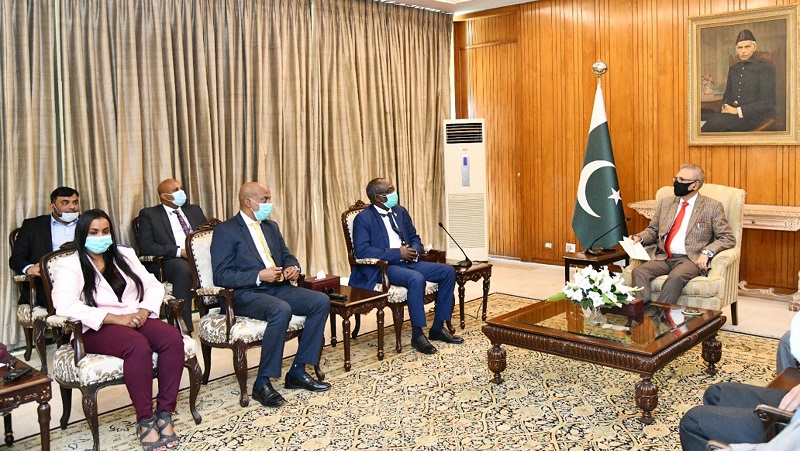 The president appreciated the visit of the Parliamentary delegation and expressed the hope it would further strengthen the existing foundation of strong bilateral relations between the two Countries.

President Arif Alvi informed that Pakistan highly values its ties with Djibouti and has decided to open its Embassy there and Resident Diplomatic Missions in other African Countries.

Dr. Arif Alvi sought the support of the government of Djibouti to expeditiously process and clear Pakistani goods at Djibouti Port meant for Ethiopia and other destinations in the Horn of Africa.

Furthermore, the president also highlighted the atrocities and human rights violations being committed by India against the Muslim population in the Illegally Occupied Jammu and Kashmir (IIOJK).

The president emphasized the need for a unified call from the International Community to put pressure on India to stop human rights violations and grant Kashmiris their right to self-determination as promised under the UN Security Council resolutions.

The President of the National Parliament of Djibouti underscored the need for expanding bilateral cooperation in every sphere including culture, trade, and defense.

Both sides emphasized the need for parliamentary, cultural, and defense exchanges which would help in bringing the two Countries further closer.