In a meeting held with the Kuwaiti Foreign Minister Dr. Ahmad Nasser Al Mohammed Al Sabah in Niamey on the sidelines of the 47th Session of the OIC Council of Foreign Ministers, Qureshi said that Pakistan and Kuwait enjoy close historical and fraternal relations.

The foreign minister highlighted that a large number of Pakistanis living in Kuwait are making a major contribution in the socio-economic development of Kuwait. 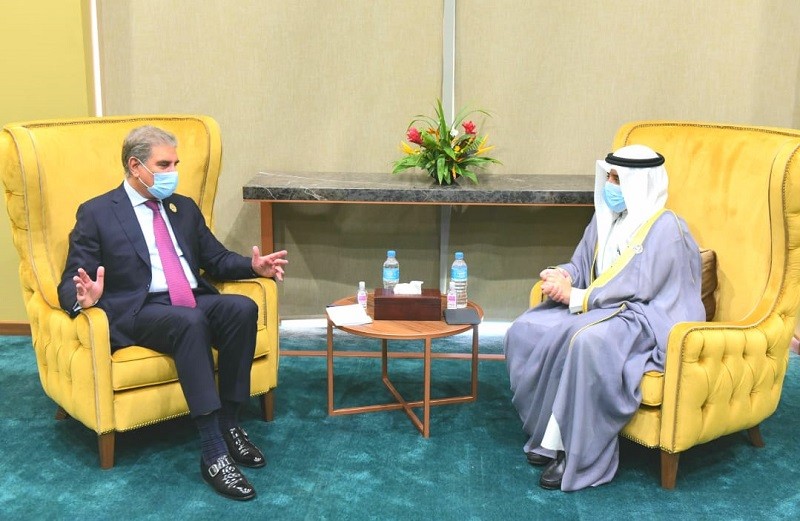 In the meeting, the two foreign ministers agreed to enhance Pakistan-Kuwait cooperation in various fields including agriculture and food security.

While highlighting the COVID-19 as a formidable global health and economic challenge, the minister appreciated the steps to counter the spread of the pandemic.

Shah Mahmood Qureshi said that despite limited resources, the government of Pakistan’s smart lockdown policy had helped in effectively countering the spread of the pandemic in Pakistan.

Qureshi briefed his Kuwaiti Counterpart on the aggravating human rights and humanitarian situation in Indian Illegally Occupied Jammu and Kashmir (IIOJK) since August 5 last year, and India’s illegal measures to change the demographic structure of the occupied territory.

The foreign minister thanked the Kuwaiti government for its consistent support to Pakistan on the Kashmir dispute.

Dr. Ahmad Nasser Al Mohammed Al Sabah also conveyed cordial greetings and a message of good wishes from the Amir of Kuwait to the leadership and people of Pakistan.

Mati
Mati-Ullah is the Online Editor For DND. He is the real man to handle the team around the Country and get news from them and provide to you instantly.
Share
Facebook
Twitter
Pinterest
WhatsApp
Previous article
Kashmiris should stay away from DDC polls under shadow of guns: Mushaal Mallick
Next article
47th Session of the OIC Council of Foreign Ministers voices Jammu and Kashmir dispute
Share
Facebook
Twitter
Pinterest
WhatsApp