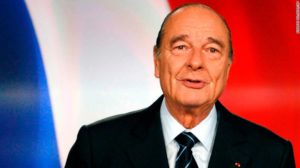 The 86-year-old Jacques Chirac died in Paris on September 26.

“The government and people of Pakistan are saddened to learn about the demise of Mr. Jacques Chirac, former President of the French Republic, who was a sagacious leader and a great statesman,” said a statement issued by the Foreign Office in Islamabad on Friday.

The statement said that the former French president played an important role in strengthening bilateral relations between Pakistan and France. It said that his services for the French nation, European Union and for the international community will be remembered for long.

Jacques Chirac served two terms from 1995 to 2007 as the President of France and also remained the French Prime Minister twice in addition to serving as the Mayor of Paris for 18 years.