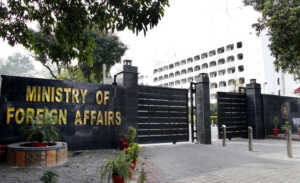 On Thursday, a fire broke out at a petroleum products distribution terminal in the Jizan Region of Saudi Arabia after it was hit by a projectile.

“Such attacks, causing fear and terror as well as disruption of commercial activities, cannot be condoned,” the Foreign Office Spokesperson Zahid Hafeez Chaudhri said in a statement on Friday.

The Spokesperson also reaffirmed Pakistan’s full support and solidarity with the brotherly Kingdom of Saudi Arabia against any threat to its security and territorial integrity.

However, no casualties were reported in the attack on the Saudi oil terminal.


Though no one responsible for the attack has officially been named but recently, Yemen’s Houthi rebels have stepped up drone and missile attacks on Saudi Arabia, particularly its energy installations.