RAWALPINDI, Pakistan: The Chief of Army Staff (COAS) General Qamar Javed Bajwa on Monday raised concern over the blame game perpetrated by some quarters in Afghanistan and the United States to undermine Pakistan’s contribution to war on terror.

The COAS voiced Pakistan’s concern while talking to the Commander Resolute Support Mission (RSM) and US Forces in Afghanistan General John W. Nicholson who called on him at the army’s general headquarters in Rawalpindi. 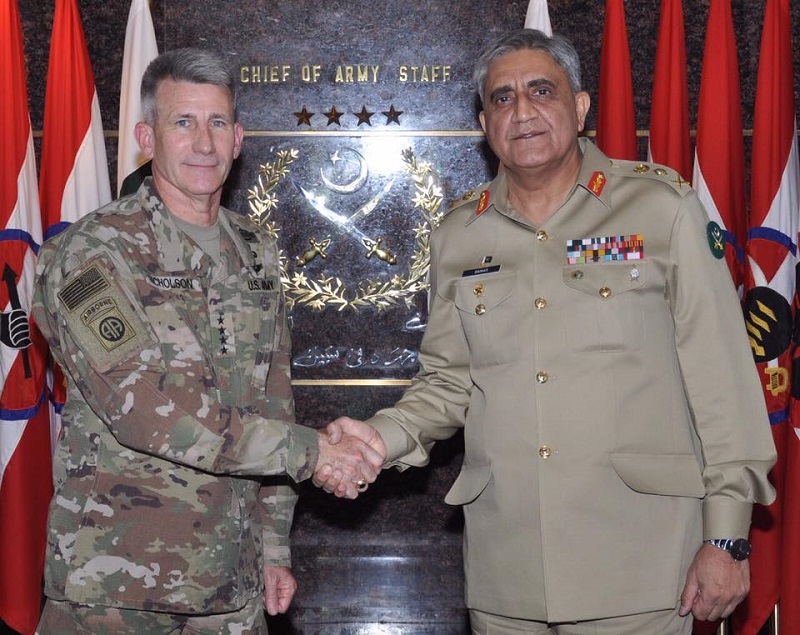 The COAS further said that it’s not a coincidence that this theme is being played at a time when policy review is being undertaken in the United States.

General Bajwa said that despite provocations, Pakistan will continue to act positively as we consider defeat of terrorism as a national interest.

General Nicholson reiterated his appreciation of the professionalism of Pakistan army and his admiration for resilience of people of Pakistan.

Both agreed on need for continuous engagement and coordination for peace and stability in the region.

The US ambassador to Pakistan David Hale was also present during the meeting.

Mati
Mati-Ullah is the Online Editor For DND. He is the real man to handle the team around the Country and get news from them and provide to you instantly.
Share
Facebook
Twitter
Pinterest
WhatsApp
Previous articleSuicide blast targets policemen on Ferozpur Road in Lahore; 26 dead
Next articleBISE Lahore and Punjab Boards Matric annual result 2017