DUSHANBE, Tajikistan: Prime Minister Imran Khan met with President of the Republic of Belarus Alexander Lukashenko on the sidelines of the SCO Council of Heads of State meeting in Dushanbe on Thursday, and discussed mutual efforts for strengthening of Pakistan-Belarus relations and exchanged views on regional and international issues.

Reviewing bilateral relations, the prime minister expressed satisfaction at the growing cooperation between Pakistan and Belarus. 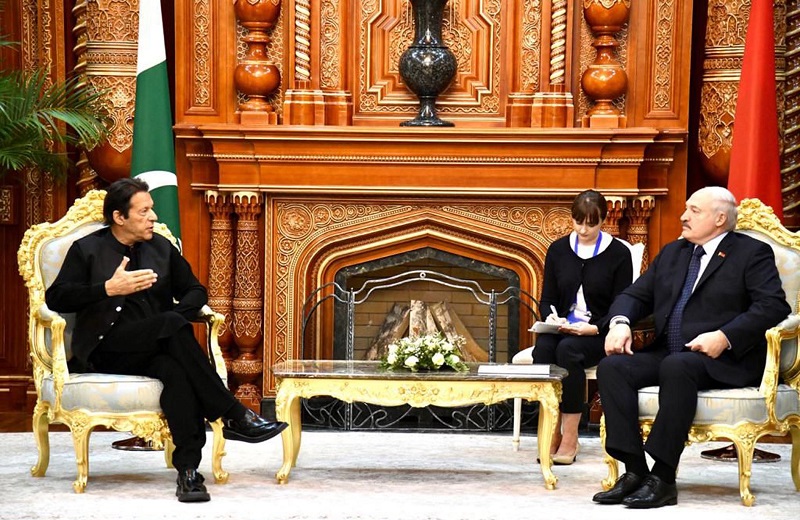 The prime minister said that Pakistan is committed to further enhancing its relations with Belarus across all fields of mutual interest including trade, investment, agriculture, industry, and defence.

It was also agreed to enhance bilateral exchanges at the highest parliamentary & political levels.

It was noted that the visit of the Belarus Foreign Minister Vladimir Makei to Pakistan later this year would contribute significantly to the consolidation & further expansion of bilateral co-op in diverse fields.

The two leaders exchanged views on the situation in Afghanistan.

Prime Minister Imran Khan underscored that as a Country most affected by conflict and instability in Afghanistan for over 40 years, Pakistan has a vital interest in a peaceful and stable Afghanistan.

The prime minister stressed that the international community must stand by the Afghan people, help avert a humanitarian crisis, and take steps to stabilize the economy.

Imran Khan reiterated Pakistan’s full support to efforts for the stabilization of Afghanistan and hoped that the international community will play a positive role in this regard.

The prime minister renewed his invitation to President Lukashenko to visit Pakistan.

The Belarus President Alexander Lukashenko extended an invitation to Prime Minister Imran Khan to visit Belarus at the earliest convenience.