Pakistan-China at 70: Second Phase of CPEC to focus on industry and agriculture

The conference brought together China and Pakistan’s key government officials, academicians, journalists, students, and civil society members under one roof. The conference featured 24 esteemed panelists from Pakistan and China talk with one voice about the importance of upholding the Pakistan-China all-weather strategic partnership.

This conference was divided into four sessions, in addition to an opening session. At the start, an exclusive 10-minute documentary production of the PCI was played for the audience titled “Pakistan-China at 70: A Unique Bilateral Relationship” along with national anthems of Pakistan and China. 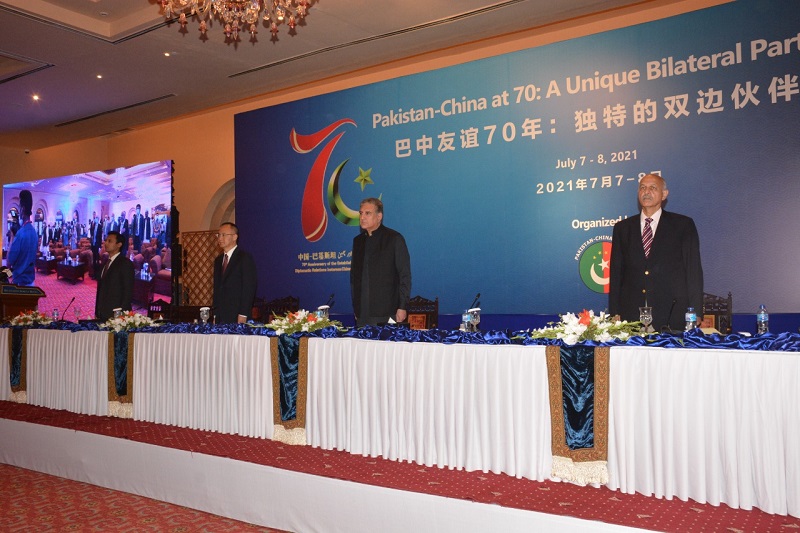 During the opening session, the Chairman of the Pakistan-China Institute Senator Mushahid Hussain Sayed extended his heartfelt felicitations to the people of Pakistan and China for being fraternal and time-tested brothers who have always enjoyed neighborly relations. He highlighted how China has changed the destiny of one-fifth of humanity by lifting 800 million people out of poverty.

Senator Mushahid Hussain also highlighted how BRI has brought together 140 countries of different continents together through connectivity, ports, pipelines, economy and energy. He also said that Pakistan is fortunate that the pilot and flagship project of the BRI, CPEC, is at the centerpiece of this global initiative to promote Corridors, Culture and Connectivity. Senator Mushahid Hussain Sayed said that Pakistan and China relations are unique because they are not transactional, they are not tactical, and they are not against any third country.

Shah Mahmood Minister Qureshi talked about the Pakistan-China friendship which he said is rooted in the heart of cooperation between the two countries. He talked of the cooperation between both countries especially during the coronavirus pandemic as China has so far donated Pakistan 3.5 million doses of vaccine, and said that Pakistan has always supported Chinese core interests. Pakistan also stood with the Chinese stance on making vaccine a global public good. He apprised the audience that the shared future of Pakistan and China is to compile infrastructure, knowledge and make it about the people. He talked about the educational cooperation between the two countries which will also ensure cultural collaboration as well.

The foreign minister talked of Pakistanis’ aspirations for peace and stability, and how China is an integral part of enabling a prosperous Pakistan. He also highlighted numerous celebrations in commemoration of 70 years of the bilateral relationship between Pakistan and China being held across both countries and especially thanked PCI for arranging this event with a dedicated panel of experts.

In his video address, the Chinese Foreign Minister and State Counselor Wang Yi highlighted that China and Pakistan are all-weather friends who understand and respect each other despite social and cultural differences. He stressed the need for practicing multilateralism and said that the zero-sum game emanating from the cold war mentality should be rejected, and all countries should work together. He also said that moving forward, Pakistan and China should join hands in safeguarding international peace, engage in dialogue with political parties of Pakistan, and encourage other countries to join against regional security threats.

While affirming commitment to Pakistan, Wang Yi said that no matter how the world changes, China will always stand firmly with Pakistan. He also thanked Senator Mushahid Hussain for promoting the Pakistan-China friendship.

After the opening session, the first session on A Model State to State Partnership- Historical context was held. Ambassador Sha Zukang expressed sincere gratitude to Pakistan. He apprised that China and Pakistan should focus on the CPEC and must focus that the job is well done. He said that CPEC is a two-way project of the BRI, which is inculcating new experience and expertise in both countries.

Lt General (retd) Talat Masood highlighted how in the aftermath of the 1965 war, China gave military assistance to Pakistan. Trailing through history, he said that as the two countries celebrate 70 years of their relationship, their shared future is bright and rests primarily on Pakistan’s own domestic matters.

The Deputy Chairman of Planning Commission Muhammad Jehanzeb Khan talked about how China is a great friend that has given Pakistan the opportunity to develop. He said it is remarkable how two culturally diverse countries are able to maintain such a close relationship.

The Executive Director PCI Mustafa Hyder Sayed labeled people-to-people connectivity pivotal to Pakistan-China relations. He highlighted the role of PCI in enabling youth exchanges, bilateral discussions, and opening up dialogue on the dynamic relationship shared by both countries.

Moreover, he said that as a think tank, PCI has connected young people with China through a targeted approach, and will continue to take Pakistan-China relations to new heights.

The Chair of the Pakistan Studies Center at Tsinghua University Professor Li Xiguangsaid that the origin of friendship between Pakistan and China started years ago. He traced the spread of Buddhism to Pakistan and labeled it an important country for a belief system that has a lot of significance for Chinese people.

The Chairman Hunerkada of the College of Visual and Performing Arts Jamal Shah labeled Chinese cultural heritage an agent of change for the Chinese people. Moreover, he added that Pakistan needs to learn from China’s policymakers for investing in the country’s cultural heritage.

Ambreen Shah said the Chinese value feedback and input, and do not carry out any gender discrimination, keeping respect and loyalty as the main ethos of their work. She also said that in China women hold key positions in companies as the Chinese reward hard work.

The third session was themed “Pakistan-China’s Shared Interests in the Changing Regional Scenario” and was moderated by Ambassador Khalid Masood who highlighted the importance of understanding changing regional scenario in the post-pandemic world, as global alliances are being reshaped.

His remarks were followed by the Chairman of PM Task Force on Science and Technology Professor Dr. Atta-ur-Rehman who said that Pakistan and China are collaborating on COVID research, and also working for educational exchanges. He also highlighted how the two will keep up their work in the field of medicine as well.

The Executive Dean of the Chongyang Institute at Renmin University Professor Wang Wena addressed the audience virtually and highlighted how the process of China’s development is an outcome of the Pakistan-China relationship.

The Vice-Chairmen of the Chinese government Association of Friendship with Foreign Countries Ai Ping said that the friendship between the people of China and Pakistan remains close as the two celebrate 70 years of the bilateral relationship.

Ai Ping also said that CPEC is the flagship project of the BRI, and this corridor has helped Pakistani people build infrastructure and meet energy needs; adding that 46 projects have been completed with an investment of around 30 billion dollars so far, while more are underway.

Lieutenant General (retd) Yaseen Malik highlighted how China is the only country in the region which has no historic baggage for Afghans. Therefore, he said that the China-Afghan relationship is likely to flourish once things stabilize in Afghanistan. He also talked about China’s overarching role in various Asian countries.

The Vice Chair Foreign Affairs Committee of National People’s Congress, Former Minister of Population and Family Planning Dr. Zhao Baige said that the BRI upholds the concept of a better future for all mankind. This project is a great example of the shared destiny of the two countries- Pakistan and China. Pakistan China friendship has always been so strong that no international issue has been able to alter it.

The Chairman of All Pakistan Chinese Enterprises Association and Chief Representative of Power China Yang Jianduo talked about how Pakistan and China have to work together for the promotion of Business to Business cooperation and ensure a better connectivity between the two countries.

Muhammad Aurangzeb said that two branches of Habib Bank Limited are located in China with 15,000 Chinese accounts. He also mentioned that HBL is providing Chinese investors opportunities for trade and investment in Pakistan. Concluding, he said, “Now is the time to monetize on the success of CPEC.”

The Advisor to Prime Minister for Commerce, Textile, Industry, and Production, and Investment Abdul Razak Dawood talked about how eight new honorary investment counselors have expressed interest in investing in Pakistan and are also willing to work pro bono and help the relationship between Pakistan businesspeople and Chinese.

Abdul Razak Dawood also talked about the incumbent government’s eagerness for promoting regional diversity under CPEC. Citing figures, Mr. Dawood said that during this fiscal year, Pakistan’s exports to China have risen by 30% to reach a value of 2.3 billion per annum, whereas Chinese work visas to Pakistan have increased by 42%.

The event lasted for even hours and had a full house of over 200 people from leading Pakistani and Chinese media, think tanks, governments, and civil society organizations. Students and faculty members of leading Pakistani universities also attended the conference.