ISLAMABAD, Pakistan: The Federal Minister of Human Rights Dr. Shireen Marzari has said that the United States wants Indian hegemony in the region and Pakistan cannot accept it, emphasizing adding that Islamabad needs to have a reality check of its relations with Washington.

In her remarks at an Online International Conference on the topic of “Emergence of Regional Security Structure in the Backdrop of Rising Asia” organized by the Center for Global & Strategic Studies (CGSS) on Monday, the minister said that since Pakistan has three nuclear-armed States in its vicinity, it needs to revise its policies and ties with the United States.

Dr. Shireen Mazari said that the relentless pursuit of nuclear technology by India is a danger for the region and gives India combat cloud capacity.

The minister said that in the post 9/11 era, Pakistan’s external threats became more acute especially in the form of the Afghan war, and India and the US are creating threats by their strategic alliance for China and this region at large.

Shireen Mazari said that Pakistan cannot have a strategic partnership with the US anymore because of their demands of pulling strings on relations with China and the US-India military cooperation.

The Conference was aimed to discuss various issues and topics related to security challenges and issues which have been raised in Asia and how a new regional security system is emerging with the rise of Asia. 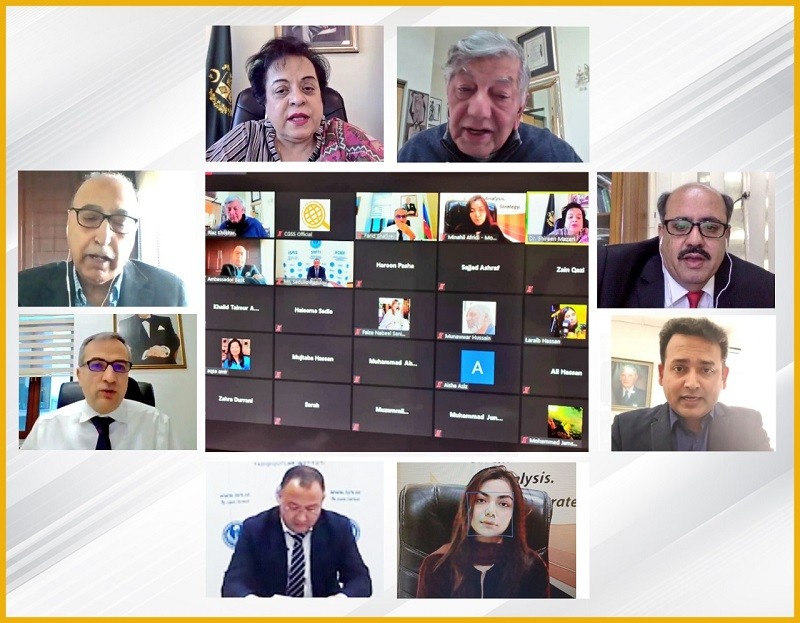 Ambassador Riaz Hussain Khokhar gave his opinion that relations between Pakistan and China are deep-rooted and many prominent Pakistani and Chinese presidents in the past have put their efforts to expand this relationship.

However, India-China relations have been tumultuous because India thinks it is a rival of China in this region, he added.

The former foreign secretary warned the audience that Indian threats to Pakistan are real. He said that the US policy of containment of Central and South Asia is to shrink Chinese, Iranian and perhaps Pakistani presence in this region by backing India. He said that India is also misusing Afghanistan against Pakistan for many years now.

Riaz Hussain Khokhar further said that Pakistan should rely on its strength and should eliminate threats against it with the help of unwavering Chinese support.

The Chairman of the Center of Analysis of International Relations in Baku Dr. Farid Shafiyev highlighted and appreciated Pakistan’s role in helping Azerbaijan in the Nagorno-Karabakh conflict and discussed prospects of projects between Azerbaijan and other regional countries including Pakistan.

Dr. Farid Shafiyev also suggested that to improve regional stability in the region, Pakistan, Afghanistan, and other countries should engage in joint projects for mutual development.

The former High Commissioner of Pakistan to India Ambassador Abdul Basit highlighted Pakistan’s past effort for nuclear deterrence in the region and how India showed a cold shoulder towards these peaceful efforts.

Ambassador Abdul Basit also emphasized that Pakistan should not shy away from using its capabilities to secure itself from regional threats against it.

The Professor at the School of Politics and IR in Quaid-e-Azam University (QAU) Islamabad Dr. Zafar Nawaz Jaspal discussed how India’s foreign policy of non-alignment has been tarnished by BJP’s expansionist policies in the region.

Dr. Zafar Nawaz Jaspal gave a glimpse of the implications of how volatile power transition in India can change this region.

The Head of Department at the Institute of Strategic & Regional Studies under the President of Republic of Uzbekistan Sadullo Rasulov stressed that conditions for security and sustainability in Central Asia is that joint support and collaboration between countries in the region should be established.

Sadullo Rasulov highlighted how his government under Uzbek President Shavkat Mirziyoyev has taken concrete steps in this regard under the SCO-Afghan collaboration initiative.

Dr. Khurram Iqbal discussed how seeds of discord were sown by English colonialism in this region in the form of regional disputes while their withdrawal from this area became imminent.

The Online International Conference was attended by 50 participants including students and experts from international relations and other diverse fields and was also viewed live on Facebook by a large audience.

Mati
Mati-Ullah is the Online Editor For DND. He is the real man to handle the team around the Country and get news from them and provide to you instantly.
Share
Facebook
Twitter
Pinterest
WhatsApp
Previous articlePM Imran Khan approves establishment of National Jobs Portal
Next articleFederal govt bans public gatherings amid COVID-19 resurgence