WINNIPEG, Canada: Pakistan’s High Commissioner to Canada Tariq Azim Khan has said that Pakistan-Canada relations are based on strong foundations of friendship and cooperation and we have to take it to new heights.

While addressing annual dinner Canada-Pakistani Business Association in Winnipeg, Tariq Aziz informed that Pakistan has laid the foundation of sustained growth and the government’s prudent policies have restored macroeconomic stability.

Tariq Azim said that Pakistan considers Canada very important partner for the size of its economy and membership of important fora like G-7, G-20, WTO and the Commonwealth. He added that Pakistan, as an emerging economy, is keen to engage in a ‘full spectrum’ partnership including in trade and investment sectors with Canada. 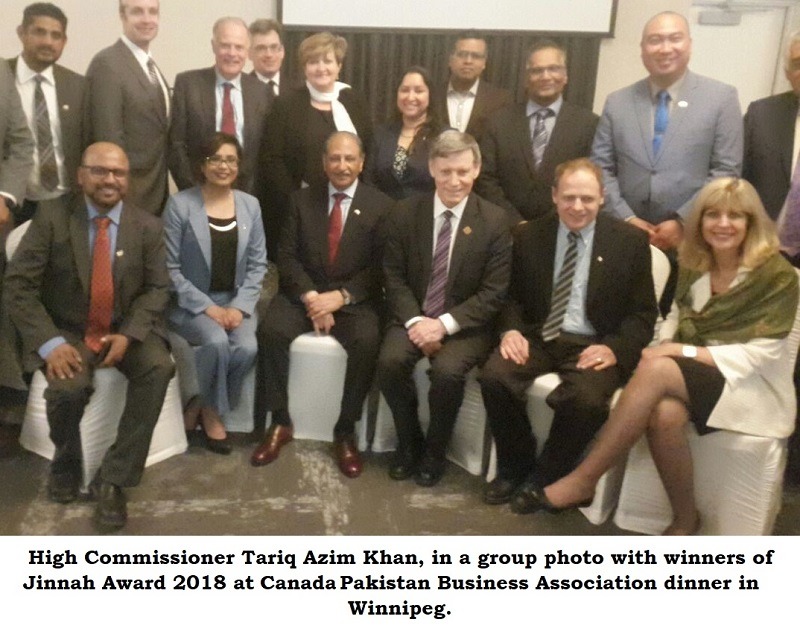 The High Commissioner noted that that the volume of our bilateral trade in goods alone has doubled in the last three years from C$ 703.7 million in 2014 to C$ 1.7 billion in 2017

The High Commissioner informed the investors that Pakistan, located on the crossroads of landlocked regions and strategic sea lanes of communication, offers attractive business opportunities and meets the priority areas for Canada’s expertise like industrial machinery, ICT, infrastructure, mining, clean technologies, agriculture and higher education sectors. He invited Canadian businessmen and investors to avail the profit making opportunity in Pakistan.

The award ceremony was attended by a large number of Parliamentarian and businessmen. The High Commissioner thanked President of Canada-Pakistan Business Association, Manitoba Anis Khan for arranging the meeting with businessmen from Winnipeg.

Mati
Mati-Ullah is the Online Editor For DND. He is the real man to handle the team around the Country and get news from them and provide to you instantly.
Share
Facebook
Twitter
Pinterest
WhatsApp
Previous articleIf former Federal Minister Pervaiz Rasheed was wrongly removed in Dawn Leaks then what was the crime of Rao Tehsin?
Next articleBaligh stresses establishment of more adult literacy centers