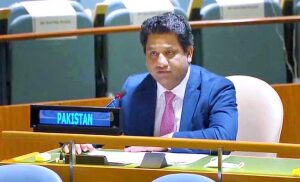 NEW YORK: The suppression of the legitimate struggles for self-determination, often brutal and violent, are among the gravest violations of Security Council and General Assembly resolutions:, said Ambassador Mohammad Aamir Khan, Deputy Permanent Representative of Pakistan to the United Nations in the General Debate of the Third Committee Under Agenda Item 67: “Right of the peoples to self-determination.”

“The right to self-determination is the fountainhead of all other rights as it contains within it a solemn guarantee that peoples everywhere in the world will have the right to determine for themselves, without force or compulsion, their own destiny,” he, added.

The ambassador said that “The exercise of the right to self-determination makes it imperative that ” the right must be exercised freely and without the threat or use of coercion or repression”.

“The right to self-determination must not and cannot lapse with the passage of time. Law, after all, has no expiry date,” he insisted.

Aamir Khan also urged that “the legitimate struggle of peoples to self-determination must not be obfuscated or eclipsed by efforts to conflate it with terrorism”.

Ambassador Aamir Khan expressed deep concern that despite these clear injunctions of international law and morality, millions continue to live under alien domination and foreign occupation.

“This is a betrayal, not only of the high ideals of the UN Charter, but also of our collective commitment to uphold these principles”.

The price of this failure is being paid, in blood, by successive generations of people living under foreign occupation, he said.

“In Indian occupied Jammu and Kashmir, this bloodletting has gone on for seventy-five years, and has accounted for the lives of over 100,000 Kashmiris. The Kashmiris have suffered more than seven decades of occupation awaiting fulfilment of their inalienable right to self-determination as promised by not one, but 11 Security Council resolutions,” he said.

“Harrowing stories abound of widespread torture, inhumane or degrading treatment and arbitrary arrests; of how thousands including children have been abducted from their homes in the dead of the night, without any trace; of hospitals running dangerously short of supplies and turning into graveyards,” he added.

“Like all oppressors, India continues to delude itself that it can subjugate the Kashmiris through the application of extreme force. That it can extinguish the light of freedom from the hearts and minds of the brave Kashmiris. It ignores the lesson of history that a people’s yearning for freedom can never be crushed by brute force,” he warned.

The ambassador thanked the UN Secretary General for his report and sustained commitment to the right of peoples to self-determination saying that the right to self-determination is a cardinal principle of the UN Charter and both the International Covenants on Civil and Political Rights and Economic, Social and Cultural Rights. It is embodied in the UN Charter’s opening words: “We the peoples”. Pakistan reaffirmed that the Jammu and Kashmir dispute will remain on the UN agenda until the Kashmiri people are allowed to exercise their will, according to the agreed method prescribed by the Security Council a plebiscite under the auspices of the United Nations. Pakistan has played an important role in the promotion of inter-religious and inter-cultural dialogue.

“We have always sided with forces that work to unite humanity and opposed those who seek to provoke violence through hate speech and defamation of religion,” he said.

“We are committed to continue our efforts to build bridges of understanding and to challenge and resist those who seek to construct walls of bigotry and hatred, which threaten to reverse the march of modern civilization,” he concluded.