ISLAMABAD, Pakistan: Pakistan and Bosnia & Herzegovina have agreed to improve the volume of their bilateral trade and expand cooperation in diversified fields.

The understanding came at a meeting between Prime Minister Imran Khan and the Chairman of the Presidency of Bosnia and Herzegovina Sefik Dzaferovic in Islamabad on Wednesday.

Later in a joint media talk, Prime Minister Imran Khan pointed out that the trade between Pakistan and Bosnia & Herzegovina currently stands at €4.5 million which is nothing.

Therefore, the prime minister added that both sides have decided to hold further deliberations to improve trade and cooperation in every field. 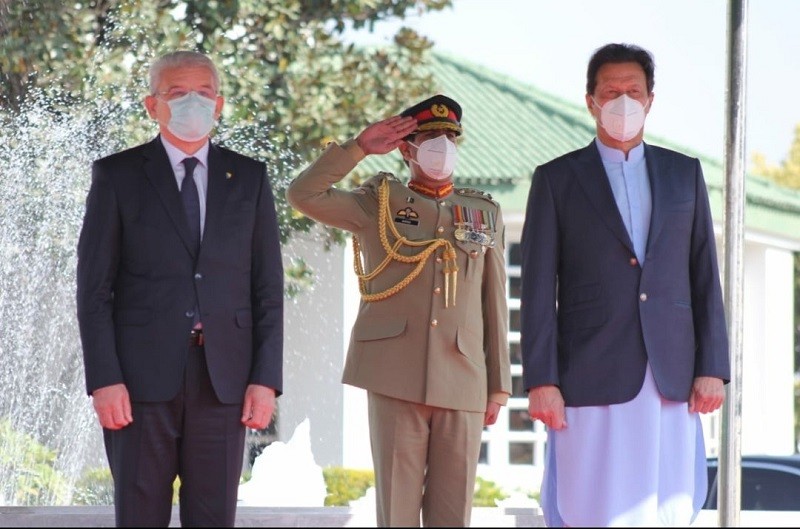 The prime minister expressed his gratitude to the Bosnian president for his principled stance on the Kashmir dispute.

Imran Khan said that India has been taken over by a fascist regime that is not only persecuting innocent people in Indian Illegally Occupied Jammu and Kashmir (IIOJK) but also targeting its minorities especially the Muslims.

Voicing his concerns over the rising trend of Islamophobia, the prime minister said that freedom of speech shouldn’t be used as a tool to hurt the sentiments of any religious community.

The prime minister said that the desecration of holy Prophet Hazrat Muhammad (Peace Be Upon Him) causes the greatest pain to the Muslims and the Western countries must understand it.

In his remarks on the occasion, the Chairman of the Presidency of Bosnia said both the Countries have stood by each other in difficult times.

Regarding Kashmir Dispute, Sefik Dzaferovic said that the human rights of the people of occupied Jammu and Kashmir must be respected. He also stressed for the resolution of the dispute in line with the UN Security Council Resolutions.

The Bosnian president also strongly condemned Islamophobic incidents in the world, saying that these are unacceptable and religious feelings of the Muslims should not be hurt.  He called for a dialogue to build bridges and evolve unity around diversity.

The Chairman of the Presidency of Bosnia said there are great opportunities of cooperation between the two countries in diverse areas including military, agriculture, and diplomacy.

Sefik Dzaferovic was appreciative of the fact that Pakistan has successfully tackled the COVID-19. He thanked Pakistan for offering assistance to Bosnia in the fight against the pandemic.

Earlier, the two sides signed two Memorandum of Understandings (MoUs) – one was related to Scientific and Technological Cooperation and the other about the readmission of their own citizens and the accompanying protocol.

Mati
Mati-Ullah is the Online Editor For DND. He is the real man to handle the team around the Country and get news from them and provide to you instantly.
Share
Facebook
Twitter
Pinterest
WhatsApp
Previous articleFederal govt approves “Rolling Spectrum Strategy 2020-23”
Next articlePakistan wants to further strengthen its ties with Nepal: President Arif Alvi