ISLAMABAD, Pakistan: The Ambassador of the Republic of Azerbaijan to Pakistan H.E. Ali Alizada has said that Azerbaijan and Pakistan are bound by the relations of strong friendship and strategic partnership which have solid roots and reflect the will of our fraternal nations.

In his remarks at a Webinar titled “Azerbaijan-Pakistan Defence Cooperation: Successes & Opportunities” jointly organized by Azerbaijan’s Embassy in Islamabad and the Center for Global & Strategic Studies (CGSS) on Wednesday, the ambassador said that one of the most important and main pillars of Pakistan-Azerbaijan brotherly relationship is also our cooperation and strategic partnership in defense, security and military fields.

The ambassador said that thanks to the efforts and positive views of the leadership of both the Countries our relations are in an upward trajectory in these fields as well.

The Webinar was dedicated to the 102nd Anniversary of Azerbaijan Armed Forces. 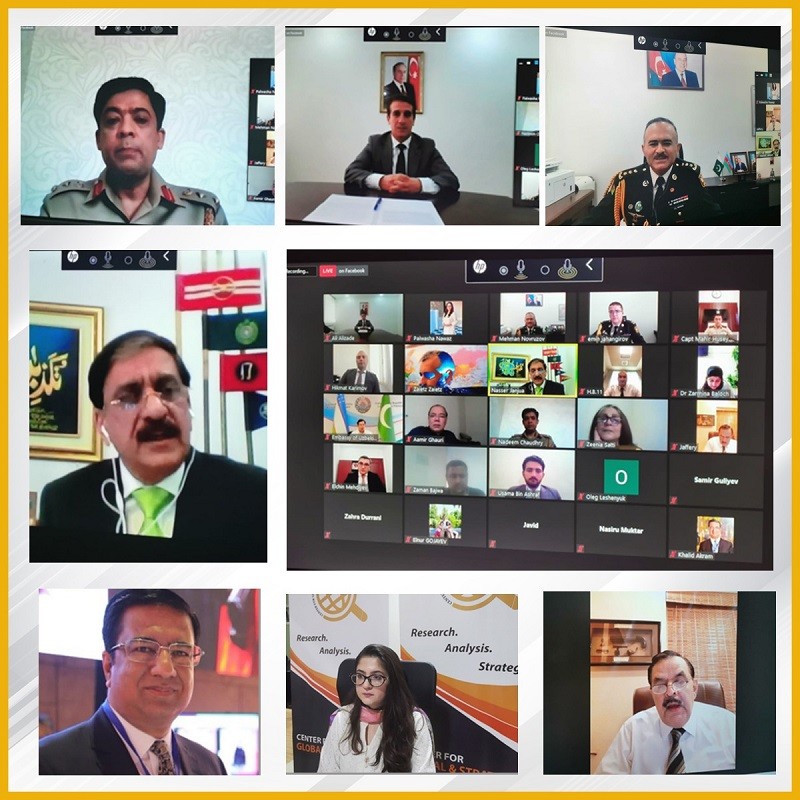 Ambassador Ali Alizada also noted that Pakistan armed forces’ and its leaderships’ support to Azerbaijan on Nagorno-Karabakh conflict and demand of unconditional withdrawal of Armenian occupational forces from internationally recognized territories of Azerbaijan is commendable and very much appreciated by the government and people of Azerbaijan.

The ambassador thanked Pakistan armed forces and its leadership for continued cooperation and expressed his confidence for further strengthening bilateral relations in the years ahead.

Earlier the Session was commenced with the opening remarks by the Executive Director CGSS Lieutenant Colonel (retd) Khalid Taimur Akram.

Lt. Colonel (retd) Khalid Taimur Akram said that it is an honor for CGSS to organize this Webinar and honoring the Armed forces of Azerbaijan. He stressed the strong bond that the two countries share.

The former National Security Advisor of Pakistan Lt. General (retd) Nasser Khan Janjua as the guest of honor said that it is a great occasion to commemorate the sacrifices and contributions of Azerbaijan Armed Forces.

The President CGSS Major General (retd) Syed Khalid Amir Jaffery said that Pakistan has brotherly relations with Azerbaijan and great prospects of cooperation especially in defense and military areas. He congratulated Azerbaijan on the 102nd Anniversary of their Armed Forces.

Colonel Mehman Novruzov said that under the leadership of H.E. Ilham Aliyev, the President of Azerbaijan, the Azerbaijan army has undergone rapid developments and at the present is ranked 64th among the armies of the other countries of the world.

The Defence Attaché said that Pakistan and Azerbaijan are extending cooperation in the field of security, military technology, and educational spheres. Many visits have been carried out between representatives of both countries in this regard.

The Webinar was moderated by the Project Executive CGSS Ms. Palwasha Nawaz and was attended by 45 participants from diverse backgrounds.