Islamabad, Pakistan: “ASEAN has transformed into a vibrant 10-member Organization, an increasingly integrated economic community, and a central pillar of regional architecture. Pakistan needs to prioritize five areas of cooperation with ASEAN, which include: strengthening of Pak-ASEAN connectivity, support for the business communities to comprehensively upgrade economic cooperation with ASEAN countries, focus on tourism, explore avenues of cooperation in Science & Technology, IT and higher education and lastly deepen our cultural exchanges.”

This was stated by Pakistan’s Foreign Secretary, Sohail Mahmood who was the Chief Guest at the Pakistan-ASEAN Experts Dialogue titled, “Pakistan-ASEAN: Shared Future and the Way Forward”, organized by the Centre for Strategic Perspectives (CSP) at the Institute of Strategic Studies Islamabad (ISSI), in collaboration with the Indonesian Embassy and the ASEAN Committee in Islamabad (ACI) today.
The members of the ASEAN Committee in Islamabad included the Chairman of the Committee, Adam M. Tugio, Indonesian ambassador in Islamabad; Nguyen Tien Phong, ambassador of Vietnam; Abdul Mubdi Osman, Charge d’Affaires, High Commission of Brunei Darussalam; Lutfee, Charge d’Affaires, Embassy of Thailand; San Yu Kyaw, Minister Counsellor, Embassy of Myanmar; Dan Erwin Bagaporo, Third Secretary and Vice Consul, the embassy of Philippines; and Deddy Faisal Ahmad Salleh, Charge d’Affaires, Malaysia who joined on zoom. 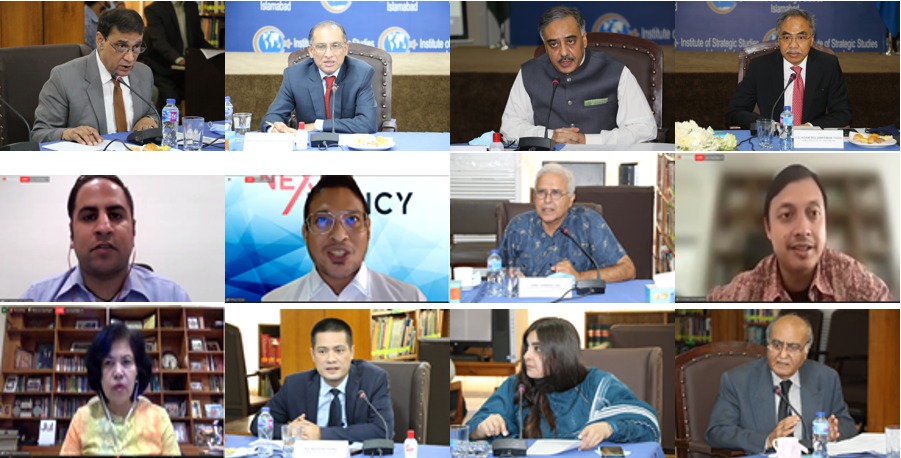 Speakers from Indonesia and Pakistan made short presentations on three dimensions of Pakistan-ASEAN cooperation including political and security cooperation; economic collaboration; and socio-cultural cooperation. The speakers included: Dr. Dewi Fortuna, Indonesian Academy of Sciences; Dr. Fithra Faisal Hastiadi, Executive Director of Next Policy; Dr. Shofwan Al Bana, Executive Secretary, ASEAN Study Centre; Ambassador Aizaz Ahmad Chaudhry, DG, ISSI; Dr. Usman Chohan, Director, Economic Affairs, CASS; and Ambassador Mian Sanaullah, former ambassador of Pakistan to Indonesia.
Director CSP, Najam Rafique moderated the dialogue and said that it seeks to bring together experts and practitioners of policy together to make recommendations for a comprehensive engagement between Pakistan and ASEAN under Pakistan’s Vision East Asia and Prime Minister Imran Khan’s desire for geo-economic engagement with regional countries.
Earlier, in his welcome remarks, Director General ISSI, Ambassador Aizaz Ahmad Chaudhry said that this is the start of a process and that such dialogues help in generating ideas for future engagement. The Chairman of the ASEAN Committee in Islamabad, H.E. Adam M. Tugio in his introductory remarks stated that this is a good forum to increase collaboration between ASEAN and Pakistan and it is time to extend the scope of this relationship by having multidimensional cooperation.
During Session-I, titled, ‘Pakistan-ASEAN: Political and Security Cooperation, Ambassador Aizaz Ahmad Chaudhry, in his presentation, shed light on the changing world order, declining multilateralism, US-China rivalry in Asia-Pacific and its effects globally. He further stated that we require a delicate balancing act and that Pakistan must increase its cooperation with ASEAN and a quantum leap is required in this regard. Prof. Dr. Dewi Fortuna, in her presentation, stated that we must look at the ASEAN’s vision of inclusivity and work on two areas of cooperation, the normative sphere and the technical areas. Dr. Dewi further said that there is great potential for Pakistan-ASEAN relations.
In Session-II on ‘Pakistan-ASEAN: Dimension of Economic Cooperation, Dr. Usman spoke at length about Pak-ASEAN economic relations. He appreciated Pakistan’s foreign policy shift to geo-economics and expressed his optimistic views on building deeper economic ties. Dr. Fithra Faisal Hastiadi offered a succinct analysis on effectively tapping the economic potential of ASEAN. He said that in the modern era, although the geographical distances have reduced to nothing yet the non-geographical distances do matter. He shed light on cultural and political barriers in this regard. He said that ASEAN region is highly dynamic and offers an interactive window to the interested players on the basis of soft and open regionalism. He suggested that an interactive strategy must be followed for productive and effective outcomes.
In Session-III on ‘Pakistan-ASEAN: Future of Socio-Cultural Cooperation’, Ambassador Mian Sannaullah stressed upon considering the social network of ASEAN countries. Talking about the concept of ASEAN community, he elaborated on its three main pillars: political-security, economic and socio-cultural. He said that the impact of social and cultural linkages cannot be ignored in Pakistan-ASEAN relations. Dr. Shofwan Al Banna in his presentation suggested that the exchange of inspirational ideas and personalities are of critical importance. He referred to the works of Pakistan’s national poet, Muhammad Iqbal who is a well-known literary figure in Indonesia. He said that there is ample room for cooperation in the fields of academic exchange and people-to-people contacts.
The dialogue concluded with remarks by Ambassador Tugio with a proposal for an interactive engagement between Pakistan and ASEAN in order to analyze each and every aspect of Pak-ASEAN relations. In his vote of thanks, Chairman BoG, ISSI, Ambassador Khalid Mahmood thanked all the participants for making this dialogue a successful event while making a case for nurturing socio-cultural ties and economic linkages with the ASEAN countries.