ISLAMABAD, Pakistan: Pakistan Army has categorically rejected the notification released by the Prime Minister’s Office in Dawn Leaks issue, saying it “is incomplete and not in line with recommendations by the Inquiry Board”.

Notification on Dawn Leak is incomplete and not in line with recommendations by the Inquiry Board. Notification is rejected.

“It isn’t a notification, I don’t know why media created hype,” Nisar said adding that the notification will be issued from the Interior Ministry.

In reply to a question regarding the ISPR tweets on Dawn Leaks notification, Nisar said that institutions don’t address each other through tweets.

The interior minister said that tweets from any side are poison to system and democracy in Pakistan. “It is very unfortunate to tackle issues via tweets,” he said.

As per the recommendations, the issue of necessary disciplinary action against Dawn Newspaper, its Editor Zafar Abbas and reporter Cyril Almeida was referred to the All Pakistan Newspapers Society (APNS).

The proceedings against PIO Rao Tehsin Ali were recommended under the E&D Rules 1973 on the charges based on the findings of the Dawn Leaks report.

“Reporter of story and publisher of story were not penalised in directions of Prime Minister Nawaz Sharif who sent his former Information Minister  Pervaz Rasheed home and now sacked his Advisor to Foreign Affairs.  A senior official of Government of Pakistan Rao Tehseen was also clamped but government did not share secrets about why this story was planted and who was behind this attempt to malign civil and military leadership”, comment a former bureaucrat when asked to comment on recommendations released by PM House.

The APNS was directed to develop a code of conduct for the print media especially when dealing with issues relating to security of Pakistan. 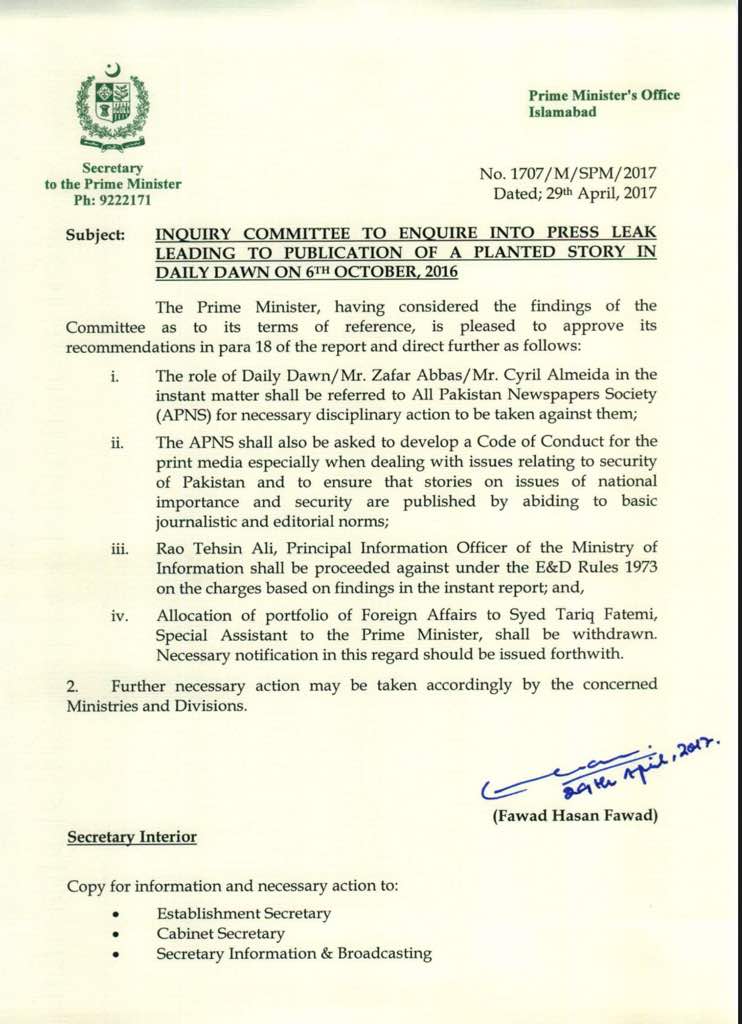 The recommendations had been put forward to the prime minister by the Inquiry Committee in its unanimous report related to Dawn Leaks Investigation.

Meanwhile in a press conference in Sukkur, the Opposition Leader in the National Assembly Syed Khursheed Shah said that as the opposition leader, he rejects the Dawn Leaks inquiry report.

Khursheed Shah said that the ISPR’s tweet is a clear message that it isn’t agreed with the report.

The opposition leader said that Fawad Hassan Fawad issued a notification on the advice of the prime minister. He said that action is already taken on the Dawn Leaks inquiry report, adding that I don’t know Chaudhry Nisar was talking about which report.

The Spokesman of the Pakistan Tehreek-e-Insaf (PTI) Naeem-ul-Haq said that this inquiry report should be made public as only issuing statement will not resolve this issue.

Naeem-ul-Haq said that we want to know that what was the role of Tariq Fatemi?, adding that it should be told whether Prime Minister Nawaz Sharif and his daughter Marriyum Nawaz were investigated or not?

“We will rise this issue in National Assembly,” he said.

Following the Dawn Story, Pervez Rasheed was asked to tender his resignation as the Information Minister over negligence committed on his part while an Inquiry Committee headed by Justice (retd) Aamir Raza was formed to probe the Dawn Leaks.