RAWALPINDI, Pakistani: The Chief of Army Staff (COAS) General Qamar Javed Bajwa has reiterated that peace in Afghanistan is important for Pakistan and assured continued efforts for bringing peace and stability in the region.

The COAS made these remarks in a meeting with the US Special Representative for Afghan Reconciliation Zalmay Khalilzad at the army’s general headquarters in Rawalpindi on Wednesday. 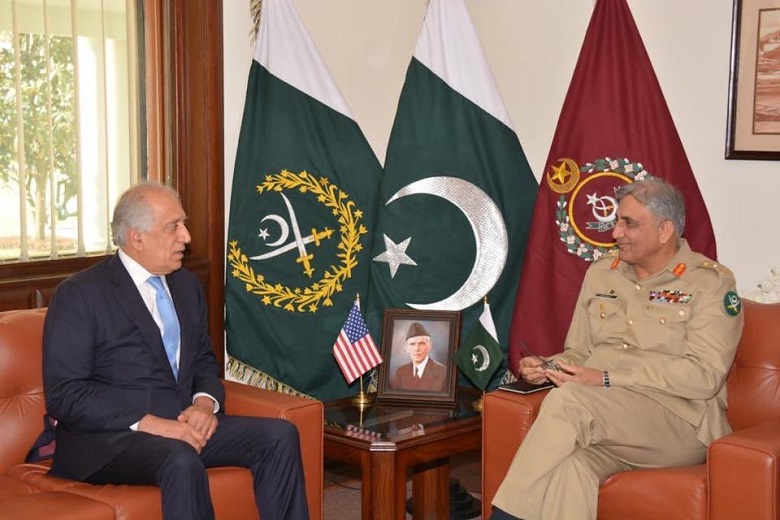 During the meeting, regional security and the Afghan peace process were discussed, said a press release issued by the Inter Services Public Relations (ISPR).

The US diplomat arrived in Pakistan after holding a two-day Pakistan-hosted reconciliation talks with the Afghan Taliban in Abu Dhabi.

In the talks, Officials from Pakistan, Saudi Arabia and the United Arab Emirates (UAE) also participated.

The talks were aimed at to end bloodshed in Afghanistan and bring perpetual peace to the region.

Just met w #Pakistan leaders to update them on the state of play following our meetings in UAE. Looking forward to meeting Afghan leaders in Kabul, #Afghanistan tonight.

Last Monday Prime Minister Imran Khan said in a twitter message that “Pakistan has helped in the dialogue between Taliban and the US in Abu Dhabi. Let us pray that this leads to peace and ends almost three decades of suffering of the brave Afghan people. Pakistan will be doing everything within its power to further the peace process.”

Mati
Mati-Ullah is the Online Editor For DND. He is the real man to handle the team around the Country and get news from them and provide to you instantly.
Share
Facebook
Twitter
Pinterest
WhatsApp
Previous articleInterior Minister assures more transparent system to place names on ECL
Next articleAzerbaijan expands trade activities in Arab markets