In a meeting held in Tokyo on Wednesday between President Arif Alvi and the Chinese Vice President Wang Qishan, the two leaders were of the view that Pakistan-China partnership remains unaffected by the vicissitudes of the regional and international developments and continues to move from strength to strength. 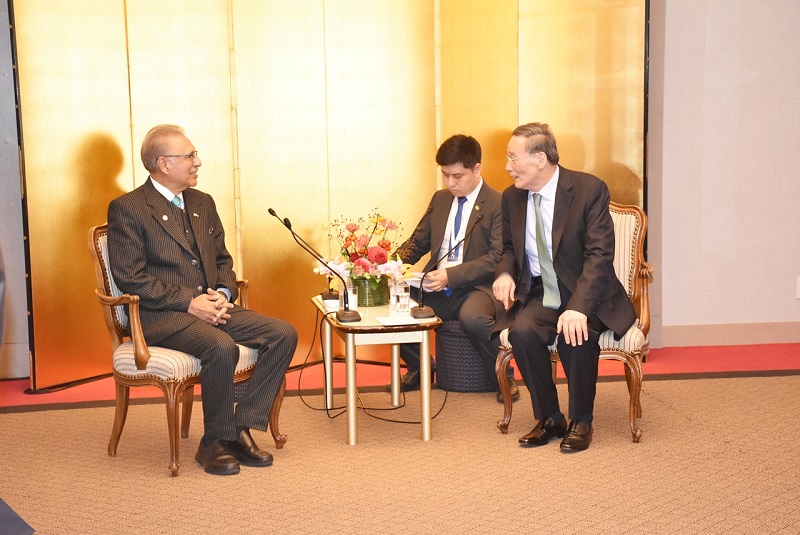 The president congratulated the vice president on the 70th Anniversary of founding of the People’s Republic of China and felicitated China for its remarkable growth and underscored that the reform and opening up process of China was a model for developing countries.

The Chinese vice president reiterated solidarity with Pakistan in safeguarding its territorial sovereignty, independence and security while President Dr Arif Alvi reaffirmed Pakistan’s commitment to the One China Policy.

President Arif Alvi briefed the Chinese vice president on the situation in Indian Occupied Jammu and Kashmir including its concerns, position, and the prevailing humanitarian crisis there.

Both sides maintained that the second phase of CPEC will promote industrial and socio-economic development in Pakistan.

Mati
Mati-Ullah is the Online Editor For DND. He is the real man to handle the team around the Country and get news from them and provide to you instantly.
Share
Facebook
Twitter
Pinterest
WhatsApp
Previous articleChina reiterates its support for territorial integrity and sovereignty of Azerbaijan
Next articleAmbassador Zaheer A. Janjua Presents Credentials to European Council President