ISLAMABAD, Pakistan: The Foreign Minister Shah Mahmood Qureshi and the Chinese State Councilor and Foreign Minister Wang Yi in an impressive ceremony on Monday formally commenced activities to celebrate 70 years of establishment of diplomatic relations between Pakistan and the People’s Republic of China.

The virtual ceremony was simultaneously held in Islamabad and Beijing and was attended by high-ranking officials from both sides. 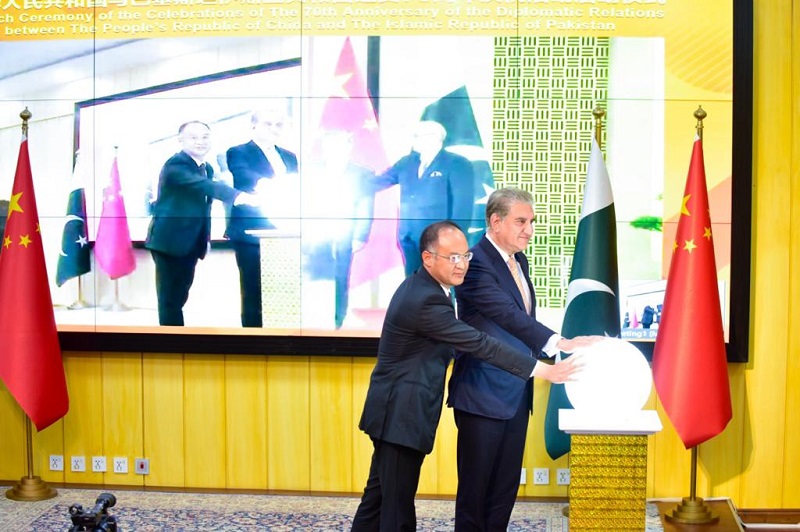 “We pay tribute to the Chinese leadership which has done an incredible job in changing the lives and destiny of its people. We believe that President Xi Jinping’s leadership, at a momentous history, has greatly helped the Chinese nation achieve its national aspirations,” Qureshi underscored speaking on the occasion.

“Successive generations of leaders and people of both Pakistan and China made invaluable contributions to strengthen these ties,” he said.

The foreign minister also reaffirmed that the China Pakistan Economic Corridor (CPEC) was set to become a High-Quality Demonstration Project of the Belt and Road Initiative (BRI).

Honoured to join my brother, State Councilor & FM #WangYi for the launch of #PakChinaAt70 anniversary celebrations at a virtual ceremony held simultaneously in Islamabad & Beijing and to unveil our commemorative logo celebrating this historic milestone. Iron Brothers! 🇵🇰 🇨🇳 pic.twitter.com/kPuTYgSwfx

At the ceremony, the Chinese State Councilor and Foreign Minister Wang Yi underlined that the Pakistan-China friendship has a time-honored history and in the seven decades the two countries have stood together in rain or shine and built an exceptional, iron-clad friendship.

A logo was launched at the ceremony epitomizing the historic nature of Pakistan-China ties.

On the special occasion of the 70th anniversary, both sides have planned a series of events, including people-to-people exchanges, spread over the entire year to commemorate this historic milestone in a befitting manner.

To mark the historic occasion, both foreign ministers authored articles that were published today highlighting how the two Countries have solidified and deepened their “All-Weather Strategic Cooperative Partnership” over seven decades, despite vicissitudes of times and changes in the international system.

Mati
Mati-Ullah is the Online Editor For DND. He is the real man to handle the team around the Country and get news from them and provide to you instantly.
Share
Facebook
Twitter
Pinterest
WhatsApp
Previous articlePakistan-China relationship turned into all-weather cooperative partnership: FM Qureshi
Next articlePak-China collaboration around poverty alleviation on the anvil