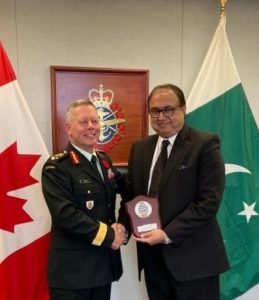 Raza Bashir Tarar said that Pakistan would like to have enhanced defence and security cooperation including participation of Canadian Armed Forces officers in the short, medium and long-term courses in Pakistan’s armed forces institution. The High Commissioner further underlined that collaboration in the field of joint exercises between armed forces of both the countries will be mutually beneficial.

The Chief of Defence Staff agreed with the High Commissioner to further explore the avenues for defence and security cooperation and enhance collaboration in areas of mutual interest.

Mati
Mati-Ullah is the Online Editor For DND. He is the real man to handle the team around the Country and get news from them and provide to you instantly.
Share
Facebook
Twitter
Pinterest
WhatsApp
Previous articleAudio Story of Life of Baba Guru Nanak Dev in Russian language released
Next articleTraveling to Astishgah Baku in Search of Footprints of Baba Guru Nanak Dev JI