ISLAMABAD, Pakistan: Pakistan has allowed the detained Indian Spy Kulbhushan Jadhav to meet his mother and wife on December 25.

In his weekly media briefing in Islamabad on Friday, the Foreign Office Spokesperson Dr Muhammad Faisal said that India has been informed regarding Pakistan’s willingness, adding that a diplomat from the Indian High Commission in Islamabad will be allowed to accompany the visitors.

“Requisite security would be provided to the visitors,” he said. 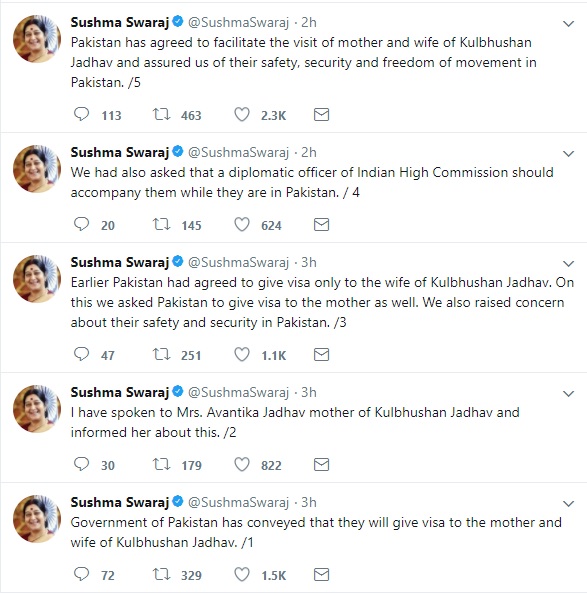 In reply to a question, Dr Faisal said that the Indian troops has committed more than 1300 ceasefire violations in 2017, the highest ever in the recent past, and which resulted in 52 deaths and 175 injuries.

“We have consistently stressed that Indian aggression is a threat to regional peace and tranquility,” he said.

The Spokesperson said that Pakistan has repeatedly raised its concerns about the hegemonic conduct of India including the unprecedented escalation of ceasefire violations this year by Indian occupation forces at the Working Boundary and Line of Control (LoC) in an attempt to deflect the attention of the international community from the continuing Indian atrocities against Kashmiris in Indian Occupied Kashmir.

Dr Faisal said that when we stress the need for United Nations Military Observers group in India and Pakistan (UNMOGIP) to be allowed to function with full freedom (on the Indian side where its movement is very limited), to monitor the ceasefire violations at the LoC and Working Boundary, in accordance with the UN Security Council resolutions, India limits its movement and provides limited access. He said that In order to ensure peace and tranquility at the LoC, the mandate of UNMOGIP is crucial.

Moreover, the Spokesperson said that Pakistan’s principled position on the Jammu & Kashmir dispute is very clear and consistent.

“We maintain that the only solution to the J&K dispute is through the realization of the right to self-determination of the Kashmiris by a free, fair and transparent plebiscite under the auspices of the UN,” he said. “We have welcomed any efforts to make progress in this regard.”

The Foreign Office Spokesperson said that unfortunately, Indian belligerence and refusal to implement international obligations continue to make a mockery of the promise made by the United Nations, and the international community to the Kashmiris.