ISLAMABAD, Pakistan: The Speaker National Assembly Sardar Ayaz Sadiq on Tuesday said China had a special place in their heart and the friendship between two neighbors had no parallel in international relations.

Talking to the Chinese ambassador to Pakistan Yao Jing who called on him at the Parliament House in Islamabad, the Speaker said One Belt One Road was the most brilliant initiative of the century and China Pakistan Economic Corridor (CPEC) was the major part of that project. He said Pakistan was fully committed to the timely completion of all projects under CPEC.

Sardar Ayaz Sadiq underlined the need for regular interaction between the parliamentarians and business community of both the Countries to further strengthen the existing relations. 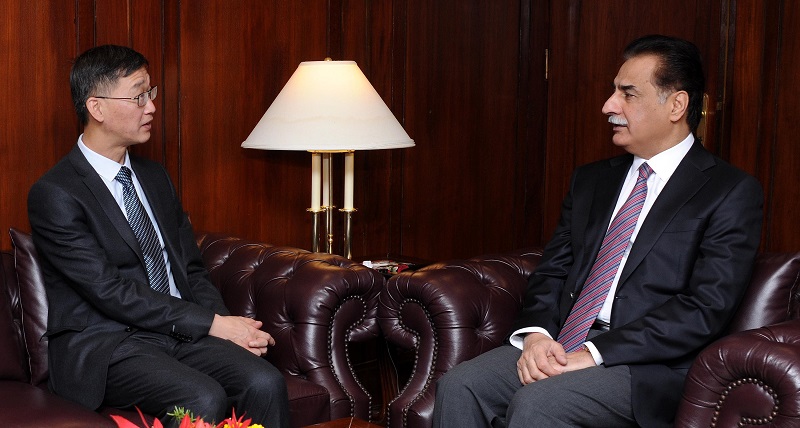 The Speaker said the relations between Pakistan and China were based on shared geopolitical, economic, historical and strategic interest, and both the Countries had always stood with each other at difficult times.

Discussing the First Speakers Conference held in Islamabad, Sardar Ayaz Sadiq said “we must resolve our issue with collective wisdom of the region.”

Ayaz Sadiq further said the time would come soon when they would control the menace of terrorism and enhance the connectivity for prosperity among stakeholders of the region.

Congratulating the speaker on holding the Speakers Conference in Islamabad, Yao Jing declared the event “The beauty of the Parliamentary Diplomacy”, and said all credit went to the Speaker National Assembly Sardar Ayaz Sadiq.”

Yao Jing further said the remarkable Speakers Conference had encouraged the regional stakeholders for further strengthening of parliamentary cooperation and connectivity to achieve sustainable peace and prosperity, adding the Conference would prove the blessing of the whole region.

The Chinese envoy said strong and prosperous Pakistan was the real strength of China. He asserted Pakistan had an unrivalled importance in China’s strategic calculations, and added the leadership of both Countries had demonstrated an unflinching resolve to further strengthen bilateral relations.

The ambassador also reiterated that a vibrant Pak-China cooperation was central for tackling challenges in the region and beyond.

Mati
Mati-Ullah is the Online Editor For DND. He is the real man to handle the team around the Country and get news from them and provide to you instantly.
Share
Facebook
Twitter
Pinterest
WhatsApp
Previous articlePakistan offers unlimited export opportunities: PM Khaqan
Next articleBilawal approves PPP Office-Bearers for Lahore