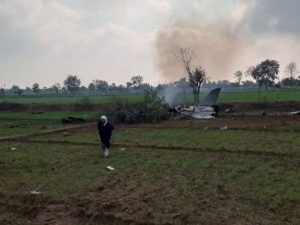 MIANWALI, Pakistan: A Pakistan Air Force (PAF) trainee jet has crashed in an open field shortly after it took off from the MM Alam Airbase in Mianwali on Tuesday, resulting in martyrdom of two pilots.

The PAF Spokesperson said that the PAF FT-7 aircraft was on a routine operational training mission when it crashed and fell in Miana Khu, a suburb area of Mianwali.

The Spokesman said that a high level Board of Inquiry has been formed by the Air Headquarters to determine the cause of the accident.

Meanwhile, the rescue and PAF teams as well as police personnel reached the crash site, wherein local dwellers had already gathered in a large number.