ISLAMABAD, Pakistan: The first-ever Aviation Art Festival is being organized by the Pakistan Air Force (PAF) at the Pakistan National Council of the Arts (PNCA) in Islamabad on February 28 and 29, 2020.

The Aviation Art Festival – featuring “All Pakistan Aviation Art Competition and Exhibition 2020” – is part of the celebrations on the first anniversary of “Operation Swift Retort”.

The exhibition will be open for the general public at the PNCA on February 28 and 29. 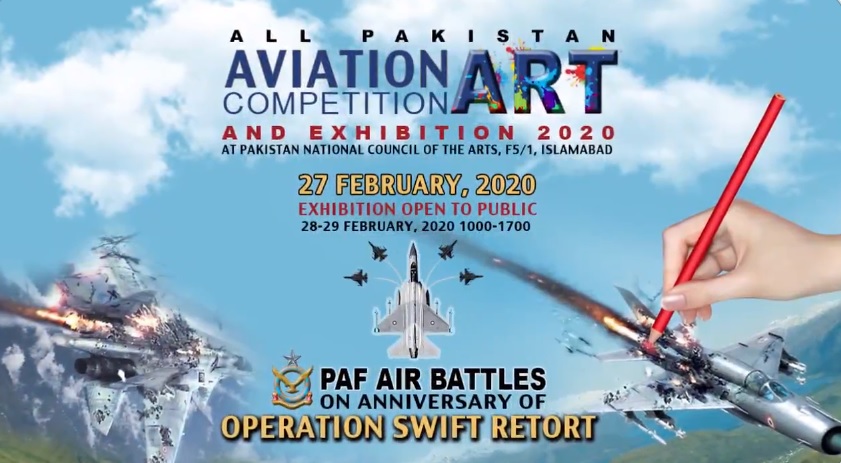 In the exhibition, art works of the renowned Aviation Artists Group Captain (retd) Hussaini and other young artists will be showcased.

Separately, the PAF will also hold an Air Show over Sea View Karachi at 12:00 pm on February 27 to commemorate the first anniversary of “Operation Swift Retort” in a befitting manner.

Recently, the PAF released a new song “Allah-o-Akbar” sung by Shuja Haider as a tribute to the chivalry of valiant Jawans of Pakistan Air Force.

Mati
Mati-Ullah is the Online Editor For DND. He is the real man to handle the team around the Country and get news from them and provide to you instantly.
Share
Facebook
Twitter
Pinterest
WhatsApp
Previous articleTrump’s offer of mediation on Kashmir negation of India’s narrative: Pakistan FM
Next articlePakistan Summons Indian Diplomat to Register its Strong Protest Over Ceasefire Violations