OSCE Chairperson-in-office Ann Linde stressed the importance of trilateral cooperation between Armenia, Azerbaijan and Georgia for the establishment of sustainable peace and promotion of economic development in the South Caucasus, while she made a speech regarding the current situation in the region at the annual Security Review Conference.

She said that the Russian-brokered ceasefire agreement put an end to the Second Karabakh war, and OSCE must use this moment to renew its efforts.

Linde noted that OSCE supports the cooperation between Armenia, Georgia and Azerbaijan based on the joint involvement in infrastructure, connectivity and environmental issues.

Her special representative has already started to focus on the constructive approaches of three regional countries.

It is good to hear the positive statements from OSCE and any European organizations on the necessity of the cooperation between three countries of the South Caucasus.

However, it should be noted that there are no circumstances at present leading to the trilateral cooperation on the basis of sustainable peace and development in the region. Unfortunately, we do not see any cases that the governments of three countries, especially Armenia and Azerbaijan, are willing to come together under the umbrella to struggle for the safe and secure South Caucasus. 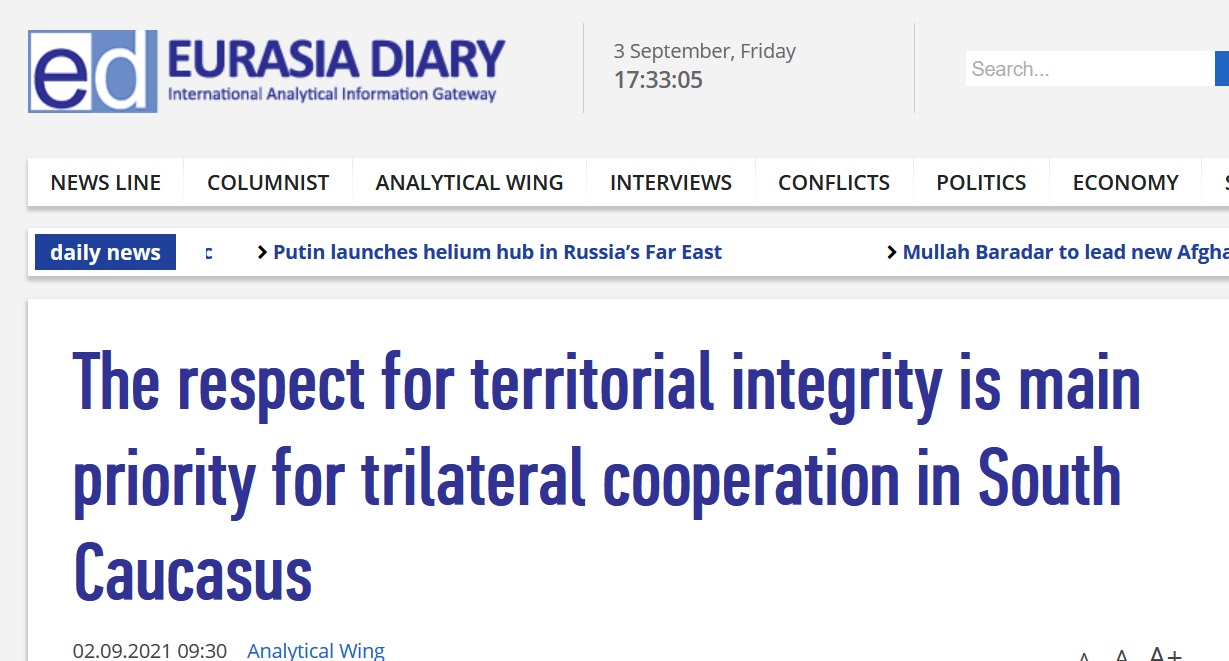 Despite the Russian-brokered November agreement putting an end to the Second Karabakh war, the relations between Armenia and Azerbaijan have not been yet normalized.

There are significant issues, which are necessary for Yerevan and Baku to decrease the tension, still remain unresolved, especially the delimitation of the state border between Armenia and Azerbaijan. Although Baku’s calls to the leadership of Armenia to engage in the negotiations on the signing of peace treaty, Yerevan still continues to demonstrate animosity against Azerbaijan and rejects any steps for peace with its neighbour.

The implementation of the November declaration by Yerevan and Baku is of significance for the protection of safety and security in the region, as well as the normalization of relations between Armenia and Azerbaijan. However, the current cases happening in the territories of Azerbaijan, where Russian peacekeeping forces are deployed, indicates that Armenia neglects adherence to its commitments and obligations by keeping its military remnants and building new posts in the Karabakh region. According to the fourth provision of the November agreement, the peacekeeping contingent of the Russian Federation shall be deployed in parallel with the withdrawal of all Armenian armed forces from the territories of Azerbaijan.

Armenian leaders should understand that the withdrawal of all Armenian troops from Karabakh is a big step for the elimination of tension with the Azerbaijan side.

The second unresolved important issue, which is the main challenge to peace and stability in the region, related to the delimitation and demarcation of the state border between Armenia and Azerbaijan. It is worth note that three months ago, Russian Foreign Minister Sergey Lavrov said that Russia is ready to create a joint commission with Armenia and Azerbaijan to find out the solutions on the geographical and legal determination of state borders. Whether through Russian mediation or bilateral talks, Baku stresses the importance of holding negotiations on the delimitation and demarcation of the state border in accordance with soviet maps. As for Yerevan, the Armenian government does not yet intend to negotiate with Azerbaijan to settle the long-term border problem. Because, Yerevan understands that if they sign the delimitation agreement with Azerbaijan, they will have to respect the sovereignty and territorial integrity of its neighbour, and they will have to avoid the claims on Karabakh region of Azerbaijan.

Having noted the importance of trilateral cooperation in the South Caucasus, OSCE should take into consideration these two important issues which I have noted above. Representatives of OSCE should put compulsions on Armenia to respect the territorial integrity of Azerbaijan and Turkey. OSCE should comprehend that the trilateral regional cooperation depends on the recognition of the territorial integrity of neighbouring countries.

OSCE should urge the Armenian government to adhere to the implementation of the November agreement for not only promotion of peacebuilding measures in the region, but also the regional economic development. According to the ninth provision of agreement, all economic and transport connections in the region shall be unblocked. The main direction of the regional communications set to found the connections and enhance economic development between Armenia and Azerbaijan. Apart from that, according to the next trilateral agreement signed in January, the regional transportations, especially railways, will be constructed in Armenia and Azerbaijan that connect the region of the South Caucasus with Russia, Turkey and Iran.

Taking into account all of them, OSCE could be involved in the activities to devise the large-scale projects to encourage the development of the regional communications in the South Caucasus. OSCE could play an important role in this matter.

As for confidence-building measures, we know that before the 44 days Karabakh war, OSCE organized the panels and talks between Armenian and Azerbaijani civil societies to persuade Armenian and Azerbaijani people to refrain from hostility and learn the positive consequences of the peaceful co-existence. Of course, all OSCE’s initiatives failed and entailed no positive results, because of Armenia’s persistent occupation of the territories of Azerbaijan.

As a result of Armenia’s continued aggression, Azerbaijani Armed Forces decided to launch the massive counter-offensive operations on 27 September 2020 to liberate its territories from the occupation.  In the space of 44 days war, Azerbaijani army managed to destroy Armenian occupiers and its military facilities, and ended the Armenian occupation in Karabakh. The territorial integrity of the Republic of Azerbaijan has been restored.

Only under these circumstances, Armenia, Georgia and Azerbaijan could come together under the umbrella to strive for turning the South Caucasus into a stable, safe and secure region.