KARACHI, Pakistan: The Pakistan Tehreek-e-Insaf (PTI) Vice President and the leader of Parliamentary Party in the Sindh Assembly Haleem Adil Sheikh has said that the opposition is trying to get an NRO by suggesting amendments in 34 sections of the NAB law.

While addressing a crowded press conference in Sindh Assembly flanked by MPA Captain Jameel, Nusrat Wahid, MPA Shahnawaz Jadon, Samair Mir Sheikh, and others, he said that the opposition has suggested amending 34 sections from the 38 sections of the NAB law and if these amendments are made all cases of corruption of the opposition leaders would be closed down.

He said through writing to amend these sections the opposition has in fact sought an NRO. 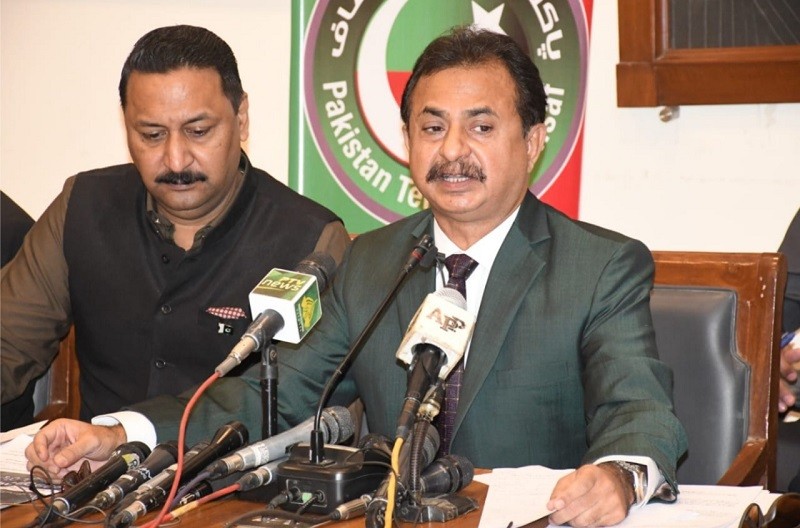 Haleem Adil said the opposition had also suggested that the NAB should not take action on corruption cases where the corruption money amount is less than one billion rupees, which means that corruption of Rs 99 Crore would be all rights and its inquiry would be conducted by ‘Aunty Corruption’. They had also demanded that the NAB should not conduct the inquiry of cases belonging to the period before 2015, which would be an NRO-plus for the PPP and PML-N. He said another demand of the opposition was that the names of spouses and children of the accused in Bi-nami cases should not be included.

Haleem Adil said that yet another suggestion was that no one would be declared disqualified till the order of the Supreme Court of Pakistan. He said this means that the cases should be continued for ten and twenty years and till their judgment comes no one should be declared disqualified. He said the opposition knows that till Imran Khan is the prime minister of Pakistan they cannot hide their corruption.

Haleem Adil further said that there is a list of 93 officers of the Sindh government who faced the NAB cases and who are again posted on their jobs. He said the officers who have struck plea baring deals with the NAB belong to different departments of the Sindh government. They include Secretary Finance Syed Naqvi, Suhail Bachani, and others who are still working on their posts.

He said Syed Hassan Naqvi is posted in Grade 20 and he had returned more than Rs 12 million from his corruption back to the NAB as a plea bargain. He said when the finance department was under Murad Ali Shah himself how this huge corruption was done under his nose. He said Murad Ali Shah has again given postings to more than 450 corrupt officers who has looted Sindh to loot and plunder the province again.

He said another name in the corruption list of the name of Grade 20 officer Suhail Bachani, who did huge corruption in the RBOD project. Grade 20 officer Syed Sardar Ali Shah chief engineer irrigation department Sukkur is also amongst the corrupt officers. Grade-19 project director LBOD Zahoor Ahmed Memon has also returned the corruption money through a plea bargain and this list includes the names of Ghulam Mujtaba Dhamrah, Habibur Rehman Shaikh, Syed Zahid Hussain, and Qadir Bux Rind who did mega corruption and retuned a part of the looted money through a plea bargain.

He said the name of the corrupt officers of district Sukkur region is also included in the list who returned looted money after a plea bargain with the NAB. He said the names of these officers are submitted by the Sindh chief secretary before the Sindh High Court.

He asked why the names of the corrupt officers of health, education, and local government officers are not included in the list of corrupt officers, despite the fact that more than 450 corrupt people have struck plea bargain deals with the NAB.

He said the NAB has recorded Rs35billion from the thieves of Sindh including Rs 23 billion cash and lands and plots of Rs12billion. He said more than Rs 22 Crore of the recovered money is handed to the chief secretary Sindh by the NAB. This money was recovered from corrupt officers of the Roshan Sindh Program and it was deposited in the fake accounts of 19 contractors. He said according to the NAB illegal contracts were given to Wudood Engineering, MGB construction, and Zafar Enterprises. He said Sharjeel Memon allegedly received Rs 77 million commission that was deposited in fake bank accounts.

Haleem Adil said the NAB has recovered cash of Rs 305 million so far, besides Rs 11.6 billion in the head of lands and plots. He said Rs 10 billion are recovered in the Sugar Mills scandal in Sindh and Rs 23 billion in the head of fake bank accounts. He said two plots costing Rs 50 Crore and 300 acres of land valuing Rs 1 billion have already been handed through the NAB to the government of Sindh.

He said in the scandal of PSO Kamran Iftikhar has submitted an application of plea bargain of Rs 1.27 billion, which is accepted by the court. He said in the Wheat theft scandal the NAB Sukkur has recovered more than Rs10billion and deposited it with the government.

Haleem Adil said after the rallies of opposition the cases of Coronavirus have increased. He said the highest ratio of COVID cases, 21.80 percent is in Karachi, followed by 19.03 percent in Hyderabad. The overall ratio in Pakistan is 7.78 percent. He said the Sindh government has failed to check the spread of the virus and the dirty politics of the PPP is behind the increase in these cases.

He said Bilawal is busy in a media campaign to save the skin of his father and other party leaders, adding had Bilawal spent half of its time on the welfare of Sindh, today the people of Sindh would not be so hapless.

Mati
Mati-Ullah is the Online Editor For DND. He is the real man to handle the team around the Country and get news from them and provide to you instantly.
Share
Facebook
Twitter
Pinterest
WhatsApp
Previous articleNorway to forge cooperation with Pakistan in renewable energy: Envoy
Next articleTECNO and PriceOye bring Flat 7% discount for TECNO fans for Year-end Sale