In a media briefing in Rawalpindi on Monday on the completion of four years of Radd-ul-Fasaad, the DG ISPR said that the operation wasn’t an area-specific; rather, it was carried out throughout the Country under the two-pronged strategy of counter-terrorism and counter-violence with the support of people, which has produced positive results in various areas.

The DG ISPR said that the war against terrorism could not be won without the support of the masses and unflinching resolve. 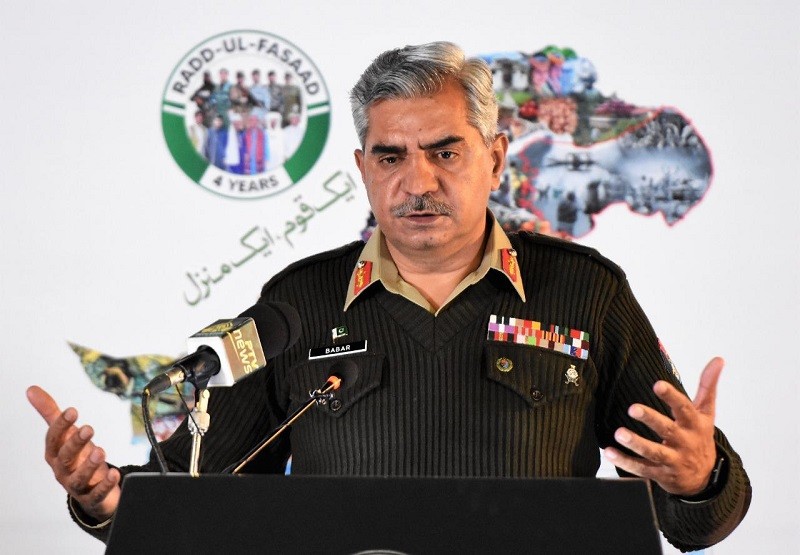 While giving details of the operation and its dividends, the DG ISPR said that significant achievements have been made in all the domains of Operation Radd-ul-Fasaad to ensure durable peace across the Country.

Major General Babar Iftikhar said that a total of 375,000 Intelligence Based Operations (IBOs) were carried out across the Country since the start of the operation in 2017. He said that the State’s writ was restored over 7,500 square kilometers through this operation.

The DG ISPR said that 353 terrorists were killed and hundreds of others were arrested during the operation.

The director-general ISPR said that most of the over 5,000 threat alerts were neutralized before their materialization during the last four years. He said that over 72,000 illegal weapons and five million ammunition were recovered. He said that 497 border posts were set up, adding that demining was also carried out in tribal districts.

Under capacity enhancement of Law Enforcement Agencies (LEAs), Major General Babar Iftikhar said that 58 new wings of FC were raised and 15 others will be established. He said that police and Levies personnel were also trained.

The DG ISPR said that 96 percent Temporarily Displaced Persons (TDPs) have returned to their homes.

Major General Babar Iftikhar said that over 1200 sub-nationalists have laid down their arms before security forces. He said that spread of hate-speech was also controlled considerably.

The director-general ISPR further said that the initiative of Paigham-e-Pakistan has considerably helped control extremism in the Country, and the religious scholars have played an important role in this regard. He said that under de-radicalization, over 5,000 people have been reintegrated to the society.

The DG ISPR said that Operation Radd-ul-Fasaad has contributed a lot to improve the law and order situation in Karachi as well. He said that the City’s position on Crime Index has dropped from sixth in 2014 to 106 today.

Mati
Mati-Ullah is the Online Editor For DND. He is the real man to handle the team around the Country and get news from them and provide to you instantly.
Share
Facebook
Twitter
Pinterest
WhatsApp
Previous article
CGSS and HSF Organize Conference on “Technological Transformation in Pakistan: An Asset or Liability?”
Next article
Stacks gives LUMS research grant of five million STX tokens, worth approximately $4.1 million
Share
Facebook
Twitter
Pinterest
WhatsApp