ISLAMABAD, Pakistan: The Prime Minister’s Special Assistant on National Security Dr. Moeed Yusuf on Monday informed the National Command and Operation Centre (NCOC) that testing regime for the airports was going to be abolished from June 2 where only symptomatic patients would be tested on arrival whereas the asymptomatic arrivals would be home quarantined and put under the track and trace system.

While briefing the NCOC which met in Islamabad with the Minister for Planning, Development and Special Initiatives Asad Umar in the Chair, Dr. Moeed Yusuf apprised the forum that two 777 aircrafts were going to fly for Saudi Arabia to bring back 26 dead bodies of the stranded Pakistanis.

During the meeting, the Provincial Chief Ministers, who joined the NCOC meeting through video link, agreed to the negative list proposed by the NCOC to allow the left over economic and industrial sectors halted due to the COVID-19 pandemic. 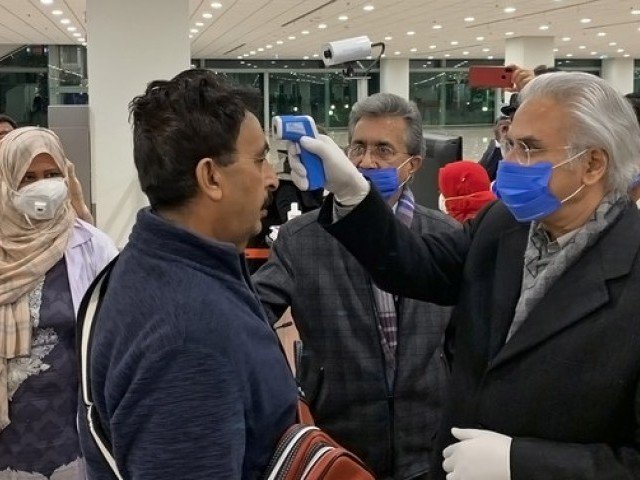 Usman Buzdar suggested the forum to review the testing regime as every single individual could not be tested and the policy should be reduced to testing of only symptomatic and affected patients.

Murad Ali Shah added that there was no public compliance of SOPs which made it difficult to allow restaurant to operate. Shah suggested that the media campaigns should underscore the following of safety guidelines and SOPs.

Mehmood Khan highlighted the issues faced by overseas Pakistanis stranded in Saudi Arabia and requested the forum to provide assistance in this regard.

The Balochistan Chief Minister Jam Kamal Khan was represented by the Parliamentary Secretary who conveyed the comments of the Chief Minister.

The Parliamentary Secretary mentioned that SOPs compliance was a major challenge in the province and, therefore, it was not possible to open up schools in the prevailing contagion.

The Gilgit Baltistan (GB) Chief Minister Hafiz Hafeezur Rehman also agreed to the proposed negative list and said that GB had already closed the sectors flagged in the list.

Hafiz Hafeezur Rehman underscored the need for a budgetary support for the province as its tourism sector, the backbone of the province, had borne the brunt of economic crunch due to the lockdown.

The Gilgit Baltistan Chief Minister added that the available ventilators were already occupied, and requested the forum to provide its share from the procured ventilators of the federal government.

The Chief Minister noted that the tourism sector would remain closed till the outbreak risk reduces.

Prime Minister Azad Jammu and Kashmir (AJK) Raja Farooq Haider Khan said that there was a need to deploy provincial health assets on the Airports of the country for swift screening and credible data gathering.

Raja Farooq Haider said that the AJK administration fully agreed to the halting of the tourism sector till the pandemic fades away.

The AJK prime minister also assured strict compliance of SOPs in all the sectors which were being allowed to open.

Speaking on the occasion, Asad Umar said that the provincial suggestions and reservations were well noted and incorporated in the decision making.

Asad Umar said that the national and political leadership at the forum had agreed upon the right to earn livelihood without jeopardizing other people’s life by spreading the virus and that punitive actions should be undertaken to ensure strict compliance of SOPs.