ISLAMABAD, Pakistan: An Online International Conference on “Regional Connectivity Strategy: Pakistan & Uzbekistan-A New Regional Commitment” was jointly organized by the Islamabad-based Center for Global & Strategic Studies (CGSS) and the Institute for Strategic and Regional Studies under the President of the Republic of Uzbekistan.

The Online Conference was commenced with the welcome remarks by the Ambassador of the Republic of Uzbekistan to Pakistan His Excellency Aybek Arif Usmanov.

The ambassador appreciated the initiative of organizing the conference & expressed his gratitude to the institutions for their participation in enhancing bilateral ties between Uzbekistan & Pakistan.

His Excellency Aybek Arif Usmanov also mentioned that this conference will identify new areas of cooperation between Pakistan and Uzbekistan and also suggest the role of both countries in the Afghanistan peace process. 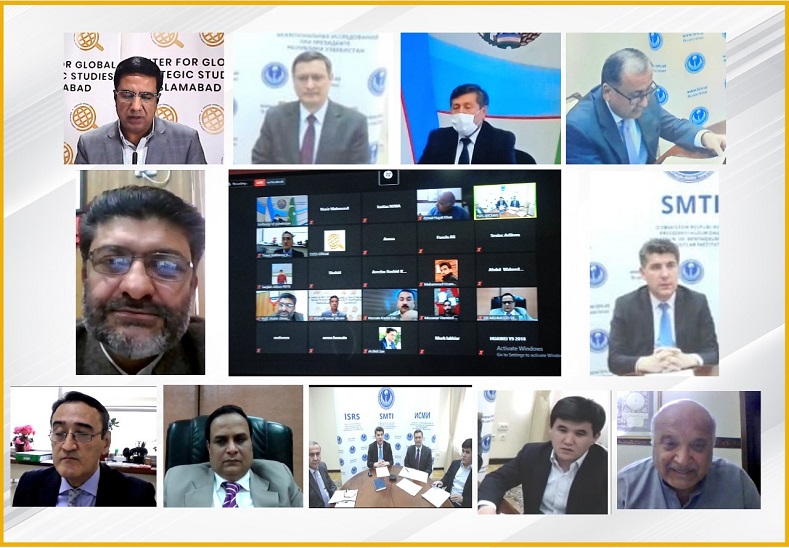 In his opening remarks, the Executive Director of the CGSS Mr. Khalid Taimur Akram said that regional connectivity is the key catchword in today’s political and economic discourse. Pakistan has a cultural and religious affinity with the Central Asian Region and in this aspect, Pakistan-Uzbekistan bilateral relations have significantly improved in recent times.

Mr. Khalid Taimur Akram emphasized that it is the need of the hour to effectively implement and execute the practical aspects of joint projects that interconnect all regional partners.

The First Deputy Director of the Institute for Strategic and Regional Studies under the President of the Republic of Uzbekistan Mr. Akramjon Nematov also shared his point of view.

Mr. Akramjon Nematov highlighted that Pakistan and Uzbekistan must support bilateral dialogue for the Afghan peace process. This support should also be extended and highlighted on all international platforms as well.

This will initiate a new paradigm of international trade, regional connectivity, and economic cooperation in the region.

Furthermore, it will become a pathway for sustainable development and progressive economic growth in Afghanistan. He appreciated Pakistan’s vision for building and developing bilateral ties between Pakistan and Uzbekistan to maximize benefits and to capitalize on the geographical importance of this region.

The Director of Area Study Centre (Russia, China & Central Asia) at the University of Peshawar Professor Dr. Shabir Ahmad Khan, highlighted that For Pakistan connectivity with Uzbekistan means connectivity with all other CARs. Pakistan is naturally facing Central Asia and considers itself part of the process of regionalism reinvigorated by President Shavkat Mirziyoyev in Central Asia.

Professor Dr. Shabir Ahmad Khan also mentioned that it is also important to harmonize and coordinate cross-border policies for smooth border crossing between Uzbekistan, Afghanistan, and Pakistan. It will result in Pakistan and Uzbekistan maximally benefit from the regional integration plans like CAREC, BRI, Eurasian Union, and ECO due to their significant geographies in respective regions.

The Head of the Department of the Institute for Strategic and Regional Studies under the President of the Republic of Uzbekistan Mr. Alisher Kadirov discussed possibilities of Uzbekistan and Pakistan cooperation for the peace process in Afghanistan.

The Head of the Department also emphasized that there are significant cultural ties between Uzbekistan and Pakistan. These cultural ties must be explored and highlighted by initiating cultural exchange programs between both countries. He also briefly discussed the positive impacts of the Mazar-e-Sharif – Kabul – Peshawar rail route and its potential role in the economic development of the region.

The Head of Department of the International Institute of Central Asia Mr. Timur Rakhimov suggested measures for the Afghanistan peace process. He was of the view that first and foremost, dialogues and negotiations must take place on a national and regional level. The International community and neighbors of Afghanistan can play a significant and crucial role in the smooth peace process for Afghanistan.

Mr. Timur Rakhimov emphasized that the people of Central Asia and Afghanistan share a mutual bond based on culture, religion, and traditions. Today, Afghanistan is seen as the key element for enhanced international transport that will eventually connect Central Asia and South Asia. Furthermore, the implementation of the Mazar-e-Sharif – Kabul – Peshawar rail route will provide an opportunity for mutually beneficial partnerships.

The Member Board of Experts at the CGSS and the Regional Geopolitical Analyst Dr. Mehmood Ul Hassan Khan said that Uzbekistan-Pakistan bilateral relations have been further strengthened during recent times because of the better political understanding, improvement in bilateral trade, phenomenal rise to tourism and joint efforts to bring peace and harmony in the region especially in Afghanistan.

Pakistan and Uzbekistan have been jointly working to achieve sustainable regional connectivity by avoiding spillover repercussions of the end game in Afghanistan. Both countries have been pursuing an Afghan own & Afghan-led solution for the future of Afghanistan, especially after the US withdrawal.

Dr. Mehmood Ul Hassan Khan emphasized that Afghanistan has been a stumbling factor for greater regional connectivity which must be now resolved for greater regional integration, prosperity, and poverty eradication for which Pakistan and Uzbekistan have been jointly playing important roles.

The Head of the Department of the Institute for Strategic and Regional Studies under the President of the Republic of Uzbekistan Mr. Rustam Khuramov highlighted that Afghanistan is becoming a symbol of cooperation in the region. From the point of view of Central Asia, many opportunities must be explored. He highlighted that South Asia is one of the fastest-growing regions in the world when it comes to its international cooperation, GDP growth, and contribution to the global economy.

Mr. Rustam Khuramov further highlighted the positive aspects of the Mazar-e-Sharif – Kabul – Peshawar rail route and stated that the establishment of many new industries, creation of job opportunities, reduced travel time between Uzbekistan, Pakistan, and Afghanistan will be achieved. Roadside infrastructure, trade opportunities, and a significant contribution to regional stability and security will also be a result of this train route.

The former Vice-Chancellor at the University of Peshawar Dr. Azmat Hayat Khan highlighted that Bukhara has a rich historical and cultural background. Business caravans, many scholars, and traders utilized this region for their trade and economic activities. He also emphasized that even today, Uzbekistan is rich in minerals and natural resources.

Dr. Azmat Hayat Khan was of the view that the year of geopolitics is gone and now is the age of geo-economy. Diplomacy is now done based on economic ties and partnerships. Furthermore, Pakistan’s future lies with Asia and its neighbors. He also mentioned that if Uzbekistan and Pakistan are connected with the rail route it will benefit Afghanistan and the entire region. The rail route will open trade opportunities. The products of Afghanistan and Uzbekistan will have a global reach. He specifically mentioned the cotton, fruits, and vegetables produced by Uzbekistan that can be exported to the Gulf countries. Infrastructure and industrial development is also an important aspect that will create job opportunities for the people of Afghanistan, proving to be a positive step towards economic stability.

The Conference was moderated by the Deputy Director of the Institute for Strategic and Regional Studies under the President of the Republic of Uzbekistan Mr. Sanjar Valiyev, and was attended by 50 participants including students and subject experts from Pakistan and Uzbekistan.

It was also viewed live on social media platforms by 100 viewers.

Azerbaijan-Armenia Standoff: A blatant aggression which is yet to be snubbed