ISLAMABAD, Pakistan: The Islamabad-based Center for Global & Strategic Studies (CGSS) organized an online Conference on the “Uzbekistan and Pakistan Partnership: The Perspective for Multidimensional Interaction” with the collaboration of Tashkent’s Information and Analytical Centre for International Relations (IACIR).

The CGSS Executive Director Khalid Taimur Akram was the moderator of the online Conference. 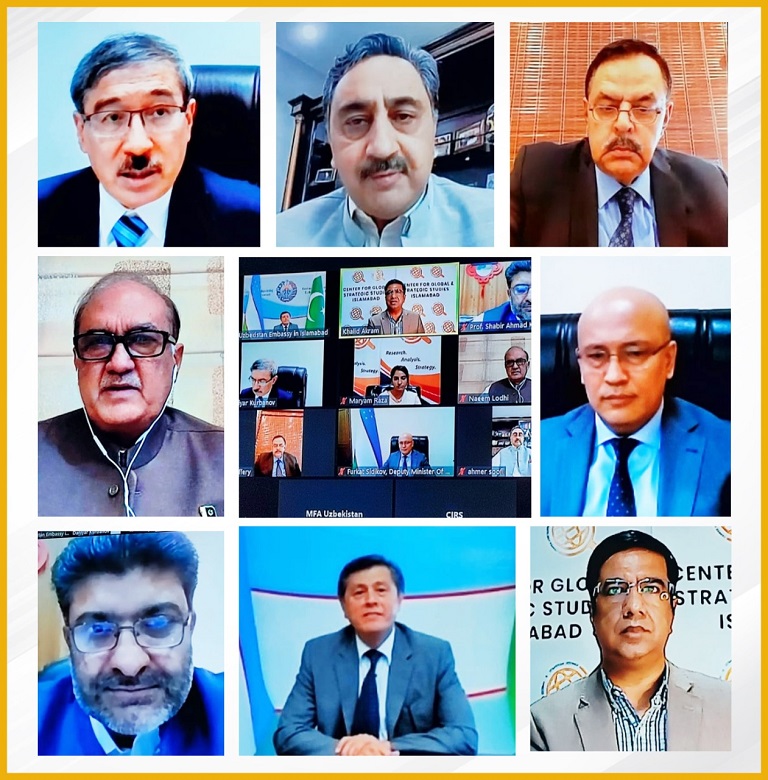 The Ambassador of the Republic of Uzbekistan to Pakistan His Excellency Aybek A. Usmanov gave the welcoming remarks. He welcomed all the participants and speakers to the online conference.

The Uzbekistan ambassador appreciated the efforts of CGSS for being a major stakeholder in enhancing bilateral relations between Uzbekistan and Pakistan.

His Excellency Aybek A. Usmanov also discussed the grand initiative of Central and South Asia regional connectivity. He stated that prospects for multilateral cooperation are high in which peace in Afghanistan is an important factor.

The Deputy Foreign Minister of the Republic of Uzbekistan His Excellency Furqat A. Sidikov shared his views on bilateral cooperation between Uzbekistan and Pakistan amid current Afghanistan’s situation. He said that the Afghanistan situation has direct spill-over impacts on Pakistan and Uzbekistan being neighboring countries. Therefore, regional countries must cooperate to find the solution of the Afghanistan crisis.

His Excellency Furqat A. Sidikov also highlighted the trade and economic turnover between Uzbekistan and Pakistan that has been increasing since the last 3 to 4 years. He suggested that it is significant to promote peace and stability in the region for enhanced economic trade and get access to Pakistan’s Gwadar port which is crucial for economic connectivity for CARs.

The President CGSS Major General (retd) Syed Khalid Amir Jaffery shared his expert analysis that cooperation between Uzbekistan and Pakistan is interlinked with Afghanistan. He discussed in detail about the recent situation of Afghanistan.

While enlightening the audience, Major General (retd) Syed Khalid Amir Jaffery said that Central and South Asian connectivity is important to enhance economic potentials. In this regard, CARs can benefit from CPEC. He suggested that all regional countries must join hands and move towards economic connectivity for long-term stability and peace in the region.

The former Federal Defence Minister of Pakistan Lt. General (retd) Khalid Naeem Lodhi expressed his views on Emerging Realities in the International political system: US Policy towards South, Central, and West Asia. He said that geopolitics cannot be separated from geo-economics and geostrategic factors. All these factors are interconnected. He discussed that emerging realities of the world are contested and interlinked. For example, China has been trying to enhance its influence through economic ideology and cooperation. Unlike, the US which always tries to use multiple tools to maintain its dominance and political ideologies over others. Lt.

Pakistan Lt. General (retd) Khalid Naeem Lodhi highlighted major important tools, i.e., economic, strategic, and hybrid that the superpowers use to gain their interest. While concluding his speech, he suggested that all regional countries must cooperate with each other to find ways to create peaceful and powerful region.

The Director IACIR Dr. Donyar Qurbanov enlightened the audience with his analysis on the ongoing Afghan situation. He said that the Taliban zone has been increasing that will create refuge crisis, and humanitarian issues for the Kabul regime. He suggested that the Taliban and the Kabul government must reach to a compromise to eradicate existing gap.

Dr. Donyar Qurbanov also stated that there is a growing need to increase interactions between Afghanistan’s neighbors. In this regard, a strong policy framework would be an additional force to bring peace to the region.  He also highlighted prospects for enhanced bilateral ties between Pakistan and Uzbekistan.

The former Federal Law Minister of Pakistan Ahmer Bilal Soofi gave a speech on the Current Situation and Future legal Parameters and options for Pakistan and Uzbekistan.

Ahmer Bilal Soofi said that possible ways to enhance cooperation between the two nations, Pakistan and Uzbekistan. In this aspect, he provided options, to implement on the legal existing agreements and MoUs between both countries. He discussed that there is a need to take advantage by existing legal bridges and agreements that would open avenues for joint ventures. He suggested that we have to be specific in order to encourage and protect the private business and entrepreneurs of Pakistan and Uzbekistan. In this aspect, best plan of action is to enhance connectivity through economic planning.

The Director Area Study Centre (Russia China & Central Asia) in the University of Peshawar Professor Dr. Shabir Ahmad Khan shared his expert opinion on the Implications of US Withdrawal from Afghanistan: Challenges and Options for Pakistan.

Professor Dr. Shabir Ahmad Khan said that if Afghanistan’s conflict is increased it will have massive spill-over on the neighboring countries in the form of drug trafficking, violence, and refuge crises. He expressed his views that there is a regional consensus to bring peace in Afghanistan. Therefore, all regional countries must devise a plan to eradicate issues with the continuity of global assistance. He also said that there is a need that different ethnic factions and groups in Afghanistan must be engaged through Loya Jirga to create peace and reach a consensus.

Professor Dr. Shabir Ahmad highlighted prospects for Central and South Asian regional connectivity in that he also appreciated the recently held international conference on Central-South Asian connectivity hosted by Uzbekistan to have constructive implications on the region.

At the end of the discussion, an interactive session was also held amongst the participants of the Conference.