Talking to the OIC secretary general, the prime minister affirmed his government’s commitment to promoting the interests of Muslim Ummah as a cornerstone of Pakistan’s foreign policy.

The prime minister maintained that Pakistan, as the current Chair of the OIC-CFM, was looking forward to playing a proactive role with regard to the matters of interest and concern to the OIC Member States. 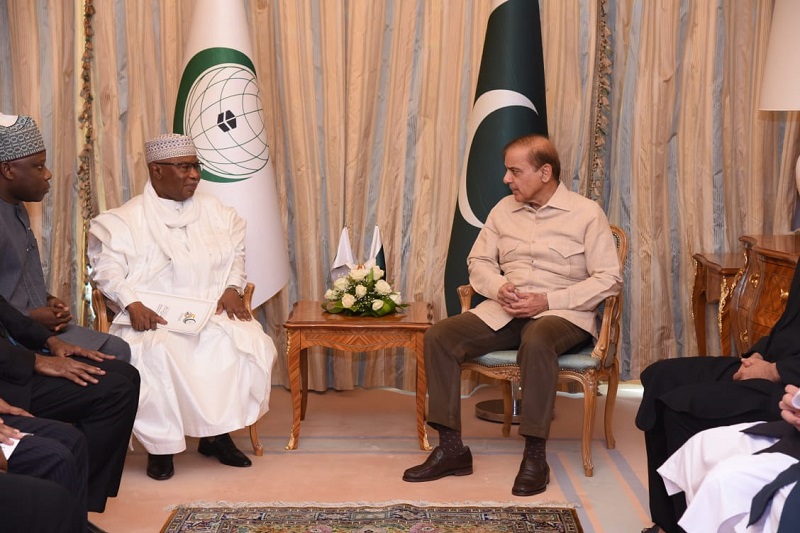 Shahbaz Sharif thanked Hissein Brahim Taha for OIC’s consistent and unequivocal support to the Kashmir cause.

The prime minister urged the Organization to lead the diplomatic endeavors towards facilitating a peaceful and lasting solution of the Jammu and Kashmir dispute in accordance with the UN Security Council Resolutions and aspirations of the Kashmiri people.

The prime minister invited OIC to launch a concerted effort to stop ongoing Israeli aggression against Al-Aqsa Mosque & other occupied Palestinian territories. He stressed that Israel must not be allowed to divide the blessed Mosque, temporally & spatially, b/w the peoples of different faith.

Prime Minister Shahbaz Sharif underscored the need for provision of urgent humanitarian assistance to the Afghan People. He emphasized that OIC should step up its efforts to counter growing Islamophobia at international level.

The prime minister invited the secretary general to pay a visit to Pakistan, which he accepted.

The OIC secretary general reiterated his felicitations to the prime minister on his recent election & assumption of office. He also highlighted the important role Pakistan has always played in OIC as a founding member.

The secretary general expressed resolve to work closely with Pakistan on key issues of concern to the Muslim Ummah, especially Palestine, Afghanistan and Islamophobia.

Mati
Mati-Ullah is the Online Editor For DND. He is the real man to handle the team around the Country and get news from them and provide to you instantly.
Share
Facebook
Twitter
Pinterest
WhatsApp
Previous articlePresident Arif Alvi visits Chinese Embassy to express solidarity
Next articlePM Shahbaz Sharif reaches UAE to meet Abu Dhabi Crown Prince