Number of times Pakistan was placed on FATF lists

Number of times Pakistan was placed in Black, Grey and White Categories of FATF in the last 10 years;

The official terminology used by the FATF is: 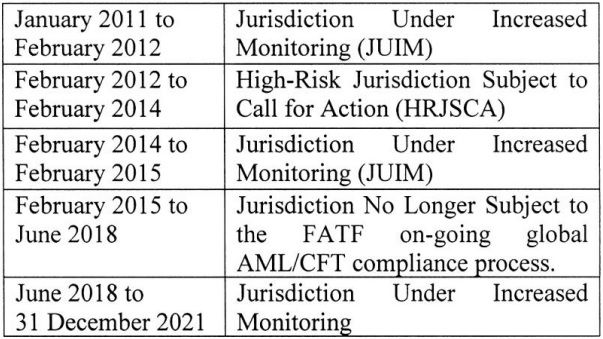 Pakistan remained on either list (High-Risk Jurisdiction Subject to Call For Action and Jurisdiction Under Increased Monitoring) of FATF from February 2008 to February 2015 (07 years), which is the longest period.

However, it is on list of Jurisdictions Under Increased Monitoring since June 2018 (42 months) which is the longest time period for being on a single list.


Note: The above information was shared by the Federal Minister for Economic Affairs Omar Ayub Khan with the Senate on January 11, 2022 in writing to a question by Senator Irfan-Ul-Haque Siddique.