ISLAMABAD, Pakistan: The National Security Adviser (NSA) Lt. General (retd) Nasser Khan Janjua has said that no human issue can be resolved by use of force alone; rather, he added, it should be resolved diplomatically and politically.

The adviser made these remarks in reference to Indian atrocities in Occupied Kashmir while talking to the Japanese ambassador Takashi Kurai who met him in Islamabad on Thursday and discussed security environment of East and South Asia besides promotion of bilateral ties between Japan and Pakistan.

Nasser Janjua briefed the Japanese ambassador on overall security perspective of the region and on the positive role Pakistan continues to play for maintenance of sustainable peace in the region. 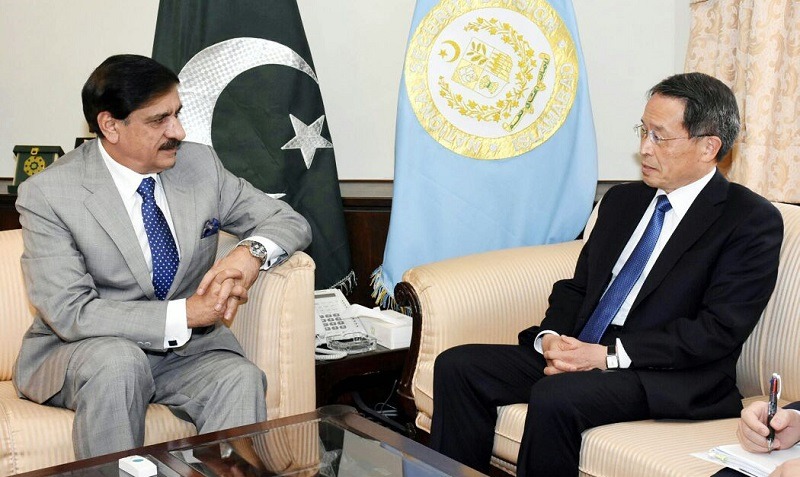 The adviser that by heating up situation at the Line of Control (LoC), by firing on villages and killing innocent civilians and by blaming Pakistan of infiltration, India is only trying to shift the focus from larger issue of Kashmir to the LoC. He urged the International Community to take notice of the accesses committed by Indian Security Forces in Occupied Kashmir.

Lt. General (retd) Nasser Janjua said that he regards the recent visit of Prime Minister Shahid Khaqan Abbasi to Afghanistan as an excellent bilateral development and reiterated that there is a need to make the best use of peace offer made by Afghan President.

The national security adviser praised the vision of the Afghan President Ashraf Ghani of seeking peace by ensuring simultaneous regional connectivity. He said that all the stakeholders should play their role in bringing peace to Afghanistan. He said that Pakistan is always willing to cooperate and strengthen ties with Afghanistan in all possible areas.

Talking about Pak-Japan ties, Nasser Janjua said that Pakistan considered relationship with Japan as a valuable asset and a solid foundation to build on more cooperative ties in future.

The ambassador apprised the adviser about the recent security developments in East Asia.

The Japanese envoy touched upon the flexibility in the stance of North Korea and willingness to normalize relations with the US and the regional countries, through dialogues. However, he emphasized that only tangible results will help seek the enduring peace of the region.

Both sides agreed to enhance the level of engagements to increase the scope of bilateral relations.

Mati
Mati-Ullah is the Online Editor For DND. He is the real man to handle the team around the Country and get news from them and provide to you instantly.
Share
Facebook
Twitter
Pinterest
WhatsApp
Previous articleIndia’s handling in Kashmir indicates its stark dissociation from reality: FO
Next articleGSMA Launches Global Mobile Money Certification Scheme