ISLAMABAD, Pakistan: The flag at National Press Club (NPC) in Islamabad will fly at half-mast on Tuesday to pay tribute to journalists who lost their lives in the line of duty when yesterday neighboring Afghanistan was rocked by multiple blasts.

As many as nine journalists including AFP Chief Photographer Shah Marai among 25 others were killed in Kabul blast on Monday while BCC Reporter Ahmad Shah was shot dead in a separate attack in Afghanistan’s Eastern Khost Province.

They also expressed their deepest sympathies and heartfelt condolences to the families and friends of those journalists who lost their lives in Afghanistan blasts. 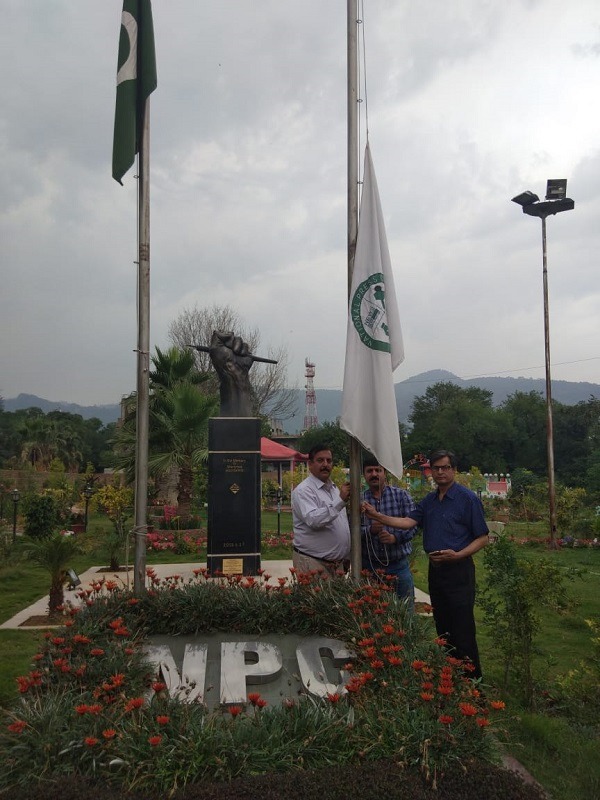 Meanwhile, the flag at the NPC will remain at half-mast and there will be a candle lighting at Martyrs’ Monument.

The RIUJ has invited all journalists/activists from Twin Cities to lit candles at the NPC at 7:00 pm today to remember dozens of journalists who were killed, abducted or disappeared especially the killing of 10 journalists in Kabul yesterday.

Friends and relatives mourn the death of Agence France-Presse’s chief photographer in Afghanistan Shah Marai Faizi at his funeral in Gul Dara, Kabul.
Marai was one of 10 journalists killed in Afghanistan on Monday pic.twitter.com/cvxFci0hdl

Separately, a delegation of RIUJ will participate in public meetings organized by Labour Organizations of Twin Cities in connection with Labour Day.

On May 2, a Conference will be organized under the auspices of PFUJ, NPC and Media Matters for Democracy (MMfD), in which representatives from political parties will also participate.

Like a Seminar will be held at NPC in Islamabad on May 3 in connection with World Press Freedom Day while a Seminar with the title “Media, Justice and Role of Law” will be organized on May 9 in which Officials from Unions of Journalists from across the Country will participate.

On May 13, a candle-light vigil will be held in memory of those journalists flogged in military regime whereas black flags will be hoisted against dictatorial decisions.

Mati
Mati-Ullah is the Online Editor For DND. He is the real man to handle the team around the Country and get news from them and provide to you instantly.
Share
Facebook
Twitter
Pinterest
WhatsApp
Previous articleLabour Day being observed with renewed pledge to promote labourers’ dignity
Next articleLabour Day: Imran Khan reiterates commitment to protect rights, dignity of workers