ISLAMABAD, Pakistan: As the annual election of National Press Club (NPC) Islamabad is inching closer, electioneering by the contesting groups is gaining momentum.

The NPC Election 2018 will take place on January 13, 2018 (Saturday) for which two groups Journalist Panel and Azad Panel – a conglomerate of eight media organizations and groups – have fielded their candidates for various Posts.

The election is being supervised by the NPC Election Committee headed by Nasir Zaidi, and also comprising Mian Munir, Chaudhry Ahsan Premee and Munawar Naqvi.

As per the final list of candidates issued by the NPC Election Committee on January 7, 4 candidates are contesting the Election 2018 for the President, 12 for the Vice-President, 3 for Secretary, 3 for the Finance Secretary, and 11 for the Joint Secretary while 43 candidates are in the run for the membership of NPC governing body.

The ruling Journalist Panel, backed by Pakistan Federal Union of Journalists (PFUJ) President Afzal Butt, has fielded its 28 candidates including 4 females to retain its glory.

For NPC Election 2018, Journalist Panel has fielded Tariq Mehmood Chaudhry for the President, Shakeel Anjum for the Secretary, and Muhammad Ishaq (Shakir Solangi) for the Finance Secretary. 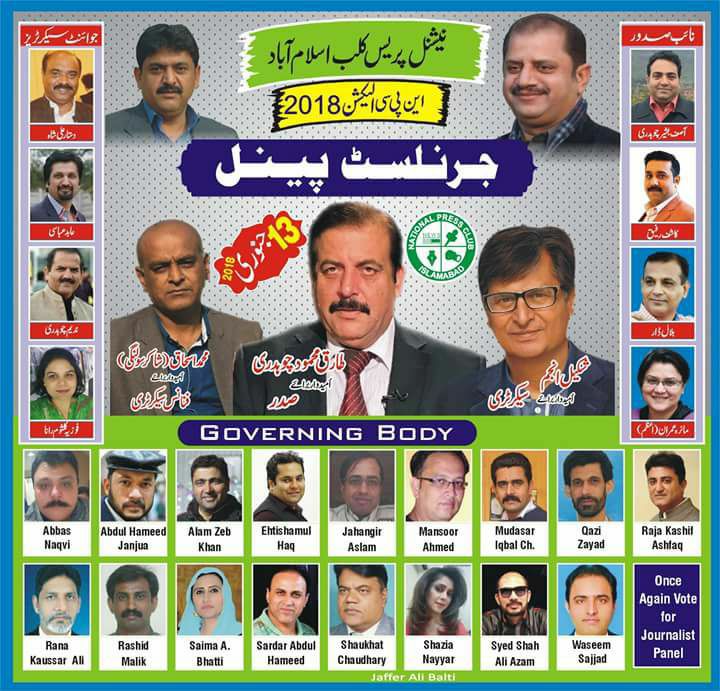 Both the contesting panels are currently engaged in election campaign to maximize their respective support.

Mati
Mati-Ullah is the Online Editor For DND. He is the real man to handle the team around the Country and get news from them and provide to you instantly.
Share
Facebook
Twitter
Pinterest
WhatsApp
Previous articleResult of Rawalpindi Board Intermediate Part I & II Supplementary Examination 2017
Next articlePPP seeks Law Minister’s response over Kasur rape incidents