ISLAMABAD, Pakistan: The National Press Club (NPC) has announced a three-day mourning over the killing of senior journalist Arshad Sharif and demanded an investigation at the highest level into his killing.

I lost friend, husband and my favourite journalist @arsched today, as per police he was shot in Kenya.
Respect our privacy and in the name of breaking pls don’t share our family pics, personal details and his last pictures from hospital.
Remember us in ur prayers. pic.twitter.com/wP1BJxqP5e

In a statement, the National Press Club strongly condemned the killing of Arshad Sharif and announced that the flag would remain at half-mast to observe a three-day mourning over his killing.

The journalist body also demanded that a Judicial Commission and Fact Finding Commission must be formed to conduct a thorough investigation to ascertain the reasons behind his killing in Kenya. 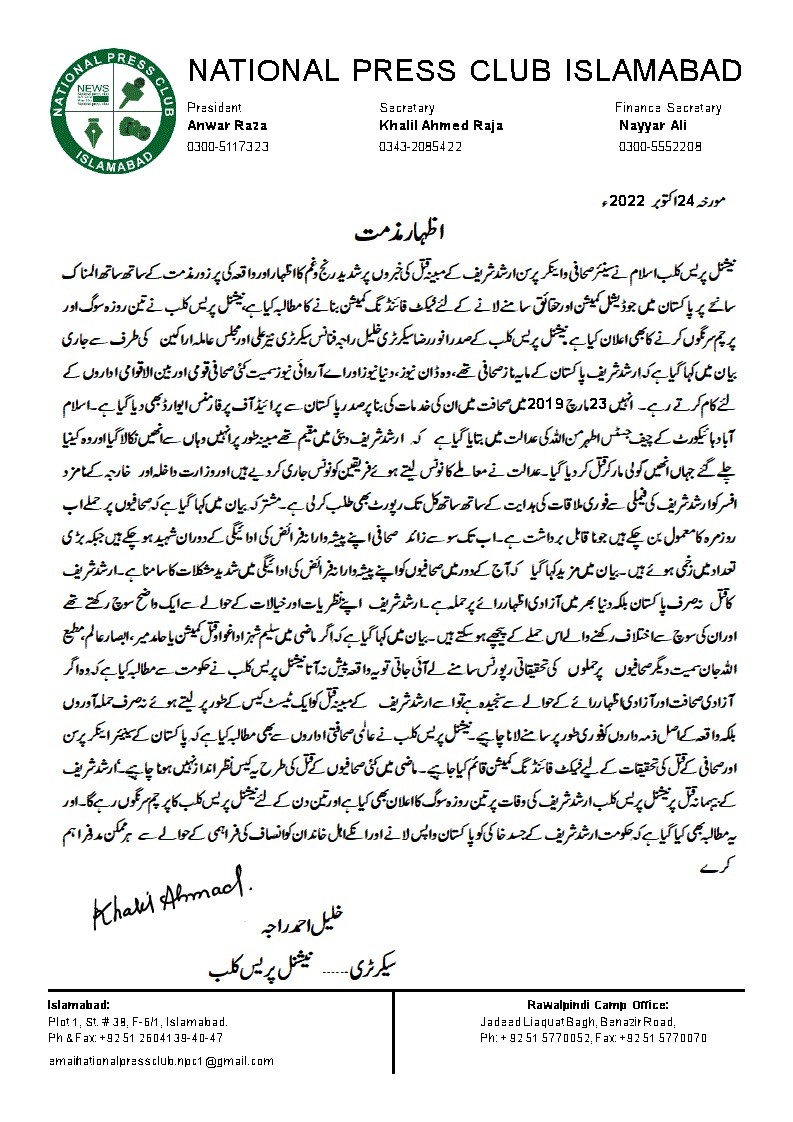 Arshad Sharif’s death Is a great loss to journalism and Pakistan.
May his soul rest in peace and may his family, which includes his followers, have the strength to bear this loss
إِنَّا لِلّهِ وانا الیہ راجعون

Wishing the Hindu community in Pakistan and around the world on Diwali 🪔, the festival of lights.

May the day bring peace, joy and harmony to our world!

No words right now. Arshad Sharif the truth cost you your life. pic.twitter.com/XiIqiiqRjk

I appeal to International Federation of Journalists @IFJasiaapacific and @CpjAsia to constitute Fact Finding Mission to probe the killing of senior anchor person and investigative journalist #ArshadShareef This case unlike many journalist’s murder should not go unnoticed.

Unbelievable. May Allah rest the soul of Arshad Sharif in peace. Ameen. https://t.co/l6ELwdCCYK

My brother,my friend my colleague arshad shareef was shot dead in Kenya..I still can’t believe it. It’s beyond heart breaking.this is just wrong.. this is painful.. I love u brother

#Pakistan🇵🇰 We are appalled by the news of the murder of Mr. Arshad Sharif. We demand a credible investigation. His name will be remembered. #ArshadSharif

Just heard shocking news of Arshad sharif’s assassination.he was like a younger https://t.co/2bvGwI52Rq hell with restraint, to hell with everything.None of us will rest till we find the bastards who did this and make them pay.feels like my heart will burst with grief.