ISLAMABAD, Pakistan: The Ambassador of Norway to Pakistan Per Albert Ilsaas called on the Speaker National Assembly Raja Pervez Ashraf in Islamabad on Monday and discussed a range of issues including the bilateral cooperation, the parliamentary ties, and the recent floods in Pakistan.

Talking to the ambassador, the Speaker National Assembly said that Pakistan considers Norway as its friend and an economic partner, and desires to further strengthen parliamentary and bilateral relations. 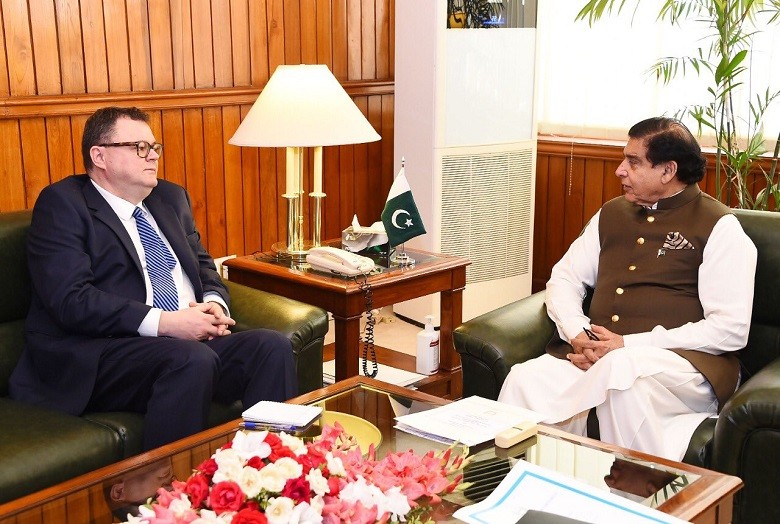 While discussing floods in Pakistan, he remarked that the people were suffering due to dystopic climate change despite having less than one percent share in carbon emissions.

“It is prime responsibility of the global community to counter devastating effects of climate change by urgently reducing emissions and devising climate-friendly policies,” he said.

Raja Pervez Ashraf said that the National Assembly of Pakistan has proposed an ‘Emergency Item’ for inclusion in agenda of the 145th Assembly of the Inter-Parliamentary Union (IPU) in Rwanda that will highlight the plight of flood-affected people of Pakistan. He asked for the Norwegian Parliament support to successfully get through the proposed resolution.

In addition, he extended gratitude to government and the people of Norway for their unwavering support for rehabilitation of flood affectees across Pakistan.

The Speaker also mentioned that the National Assembly had invited the Norwegian Speaker to visit Pakistan as continuous exchanges are vital for cementing bilateral relations.

The Norwegian emissary while expressing grief over the unprecedented losses during the recent floods in Pakistan assured to convey message to the Parliament to support the National Assembly of Pakistan’s call for global fund through IPU to tackle climate catastrophe.

The attaché also highlighted that more than 39,000 Pakistani diaspora in Norway was contributing greatly to progress of the Country. He also emphasized on reviewing bilateral business concerns to made it more profitable for both sides.

Raja Pervez Ashraf assured of his support to address impediments.

The meeting ended on a positive note with a commitment to continue cooperation on matters of mutual interest by addressing all impeding issues.