Nobody can remove Kashmir dispute from UNSC agenda: Qureshi

ISLAMABAD, Pakistan: The Foreign Minister Shah Mahmood Qureshi has categorically said that the Kashmir dispute is a reality and nobody can remove it from the agenda of the UN Security Council.

While addressing a Joint News Conference along with the UN General Assembly President Volkan Bozkir after talks in Islamabad on Thursday, the foreign minister called upon the United Nations to play its role for the resolution of Palestine and Jammu and Kashmir disputes which are on the agenda of the UN Security Council for over seven decades.

Shah Mahmood Qureshi said that there are similarities between the Palestinian situation and that of Jammu and Kashmir. He said that the oppressed peoples in both the territories faced with the worst form of human rights violations are demanding their right to self-determination. 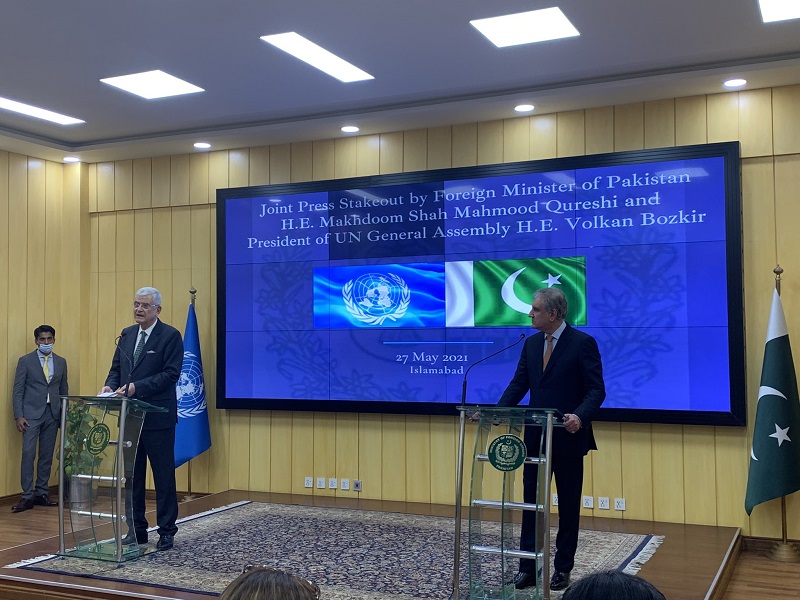 The foreign minister said that Pakistan expects the United Nations to continue to play its leadership role for the revival of the peace process in the Middle East. He said that the fire there can be extinguished through dialogue and a two-state solution in accordance with the UN Security Council resolutions.


The foreign minister said that timely humanitarian assistance should also be provided to the Palestinians affected by Israeli aggression.

The President UN General Assembly said that both Palestine and Kashmir disputes are of the same age. He reiterated that the UN position on Jammu and Kashmir dispute is governed by its charter and the applicable Security Council resolutions.

I had a very fruitful meeting with H.E. Mr Makhdoom Shah Mahmood Qureshi, @SMQureshiPTI , Minister of Foreign Affairs of Pakistan.
We discussed the major issues on the agenda of @UN and #UNGA as well as latest regional developments. #UNGA75 🇺🇳🇵🇰 pic.twitter.com/zs7MiwjDQP

Earlier the two dignitaries discussed the Palestine and Jammu and Kashmir disputes besides the Afghan peace process.

Qureshi appreciated the efforts of Volkan Bozkir for summoning an emergency session of the UN general assembly on the Palestine issue. He said that ceasefire was the first goal to get the Israeli atrocities against Palestinians stopped and there was a success on that front.

However, the foreign minister stressed the need for resolution of Palestine and Jammu and Kashmir disputes in accordance with the UN Security Council resolutions.

Shah Mahmood Qureshi said that peace will remain elusive in the Middle East without the permanent resolution of the Palestine issue.

Similarly, he said that peace cannot be established in South Asia sans the resolution of the Jammu and Kashmir dispute.