ISLAMABAD, Pakistan: Prime Minister Shahid Khaqan Abbasi on Friday said Pakistan had achieved remarkable success against terrorism and there existed no more “so-called sanctuaries” for them on the soil.

While addressing the participants of National Security and War Course at the National Defence University (NDU) in Islamabad, the prime minister mentioned that the Operation “Radd-ul-Fasaad” against terrorists was underway to purge the society from sleeper cells and sympathizers of extremists. He said the tide had turned against terrorists and their capacity to conduct activities had been immensely curtailed.

The prime minister said the State was fully conscious of the challenges relating to national security as it was tackling both internal and external problems. 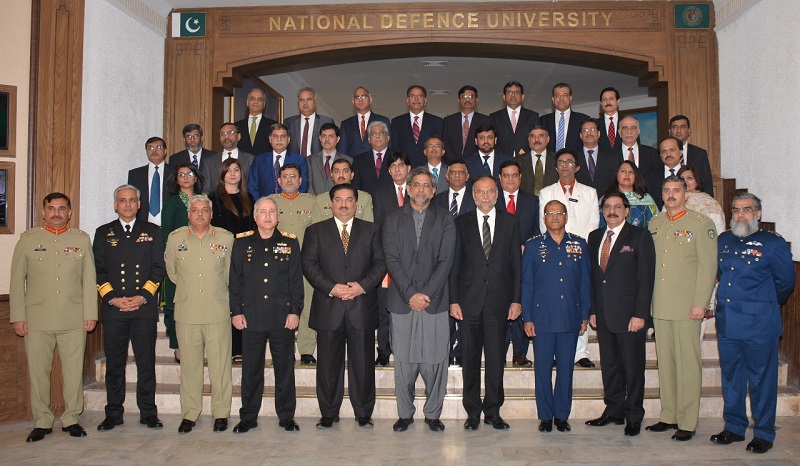 Shahid Khaqan Abbasi said there had been a paradigm shift not only from state-centric focus to societal security concerns but also in the concept and understanding of national security. He said the current security environment was increasingly fluid and was shaped by a dynamic mix of continuing and emerging challenges and opportunities.

Congratulating the course graduates, the prime minister called upon them to take steps in complimenting the national response against the threats faced by the country.

Later, the prime minister gave away certificates among the graduates of the course.

The graduation ceremony marked the culmination of National Security and War Course which had commenced last August and was attended by 29 selected participants from Civil Service of Pakistan along with members of the armed forces.

The main focus of the course was to enable its members to comprehend the interplay of all elements of national power in contrast of a comprehensive national security. It was emphasized that Pakistan’s current challenges warranted a national security response through a ‘Whole of the Nation’ approach.

Mati
Mati-Ullah is the Online Editor For DND. He is the real man to handle the team around the Country and get news from them and provide to you instantly.
Share
Facebook
Twitter
Pinterest
WhatsApp
Previous articleCulprits involved in rape, murder of Kasur girl will be arrested soon, NA assured
Next articleUS not contemplating any unilateral action inside Pakistan: General Joseph