ISLAMABAD, Pakistan: Russia has expressed willingness to supply oil to Pakistan at discounted rates; however, it denied the claim of the previous government of Pakistan Tehreek-e-Insaf (PTI) that an official correspondence had taken place between the two Countries to strike an oil deal.

In a Press Conference in Karachi on Thursday, the Russian Consul General Andrey Fedorov however admitted that the former Prime Minister Imran Khan discussed the oil trade with the Russian President Vladimir Putin when the former paid a three-visit to Moscow on February 23-24, 2022.

Andrey Fedorov said that Russia is interested in the provision of oil to friendly Countries including Pakistan, and that if Pakistan approaches us for an oil deal, we would provide them discounted oil.

The statement by the Russian consul general contradicts the claim by the former Federal Minister for Energy Hammad Azhar that he wrote a letter to his Russian Counterpart Nikolay Shulginov on March 30 for a long-term oil deal.

It’s worth noting that on May 26, Hammad Azhar also shared the letter on Twitter dated March 30 and addressed to the Russian energy minister for initiating the bilateral negotiations to reach a ‘mutually beneficial deals on LNG and petroleum products within the next month (April 2022)’. 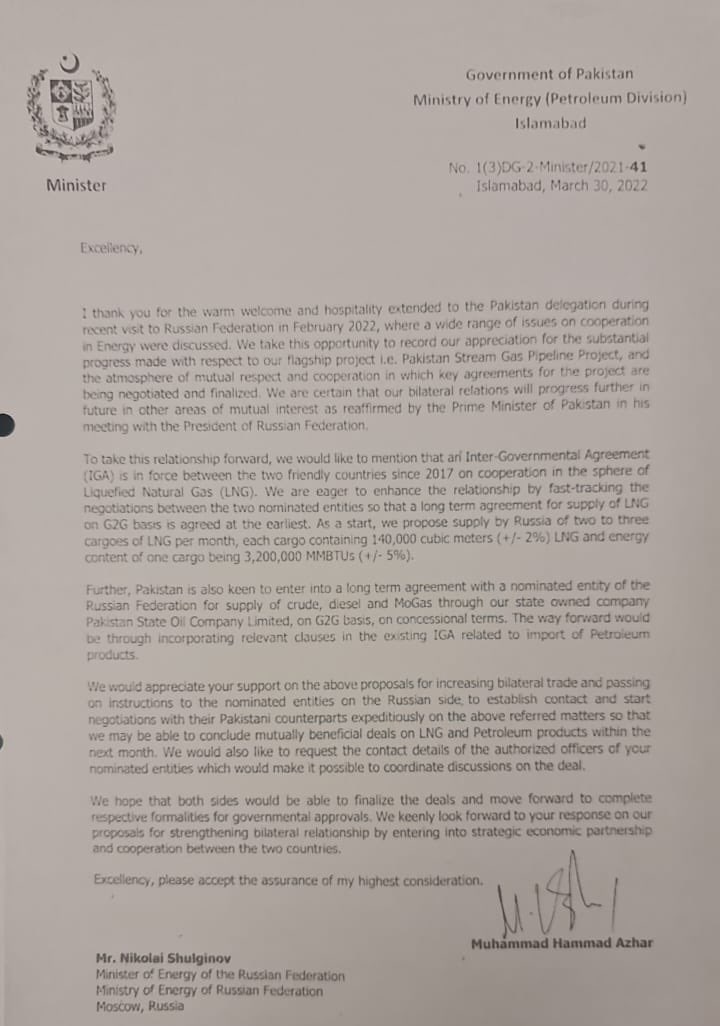 While speaking in Sawal Ye Hai Program on ARY News on June 3, Hammad Azhar told that they were confident to conclude an oil deal with Russia and ensured the supply to Pakistan in April 2022.

The former energy minister told that the target had been set to buy oil cargos in April 2022 from Russia at a cheaper price, adding that the then Prime Minister Imran Khan had also chaired two meetings on the matter.

Hammad further told that on March 29, Pakistan’s Ambassador in Russia sent me a message via the Secretary Petroleum that their discussion with the Russian authorities had been going in a positive manner and Russia was keen to supply oil to Pakistan.

The former minister told that the Russian authorities wanted him to write them a formal letter, mentioning by what time, Pakistan required the oil stock. He said that the very next day on March 30, the letter was delivered to Russians which was duly confirmed by the Ministry of Foreign Affairs in Islamabad and the Pakistan Embassy in Moscow.

Hammad Azhar said that days after the PTI government was ousted, therefore, the Russian government couldn’t respond to the letter.

On May 31, the current Finance Minister Miftah Ismail said in an interview with CNN’s Becky Anderson that if Pakistan was offered a discounted oil by Russia while Moscow remained under no sanctions, they would go for the deal.

It is pertinent to mention that according to a Reuters report on May 25, the current US sanctions against Russia do not prevent other Countries from buying Russian oil, although the Biden administration officials have considered secondary sanctions that could restrict those purchases in the future.

Though the incumbent Pakistani government is hesitant to buy oil from Russia but its neighboring India has imported more than 65 million barrels of oil from Russia at a 30% discount while the bankrupt Sri Lanka has also begun receiving the Russian oil. In addition, Bangladesh is reportedly also eyeing the discounted Russian oil.

The Shahbaz Sharif administration in Islamabad is also of the view that refineries existing in Pakistan don’t have facilities to refine Russia oil. However, the Russian Consul General Andrey Fedorov termed it just an excuse.

The senior journalist Amir Mateen also took to Twitter on June 9 and said that “Pakistan refineries can’t refine Ural crude (Russian oil) but they can easily mix (around 50%) Russia’s low sulphur crude to refine about 30% of total imports of petrol and 60% diesel. We could get refined oil and gas from Russia gradually mixing it with Arab imports.”

“Pakistan and Russia are already using Chinese currency swaps that only needs to be extended to oil and gas. So why are people being punished for Rs 209 petrol per litre. We save 30% money. Will Neutrals check this out,” he wrote.

Amir Mateen also wrote that Pakistani oil firms/refineries are dying to buy Russian oil but the current government is the obstacle and not helping them to find a way around.

“N (PML-N government) is not just not making an effort but trying to stall private purchases just because this might be politically unpopular and prove Imran Khan right,” he said.

Mati
Mati-Ullah is the Online Editor For DND. He is the real man to handle the team around the Country and get news from them and provide to you instantly.
Share
Facebook
Twitter
Pinterest
WhatsApp
Previous articleTikTok to launch new screentime management tool to boost digital well-being
Next articlePresident for enhancing bilateral engagements with Brunei Darussalam