As many as 75 Organizations placed a one-page advertisement in the prominent international daily the ‘New York Times (NYT)’ on February 16, 2021 to stand in solidarity with the Indian farmers as they continue their protest for their livelihoods.

The Justice for Migrant Women organized a letter placed as an advertisement in the New York Times on February 16 with the signatories of 75 Civil Rights, Legal, and Community Organizations speaking out both in support of the farmers and against the Indian government’s anti-democratic response to the peaceful protests.

The letter expressed solidarity with the ongoing farmers’ protest in India and calling out the Indian government’s harsh response to the peaceful protests.

“India’s response to these peaceful demonstrations run counter to the fundamental values shared by all democracies–among them freedom of expression, protest, and the press, as well as the fundamental dignity of all people–and it is time that we all lend our voices to speak against this unjust treatment with those who are fighting for their lives and livelihoods,” Mónica Ramírez said. 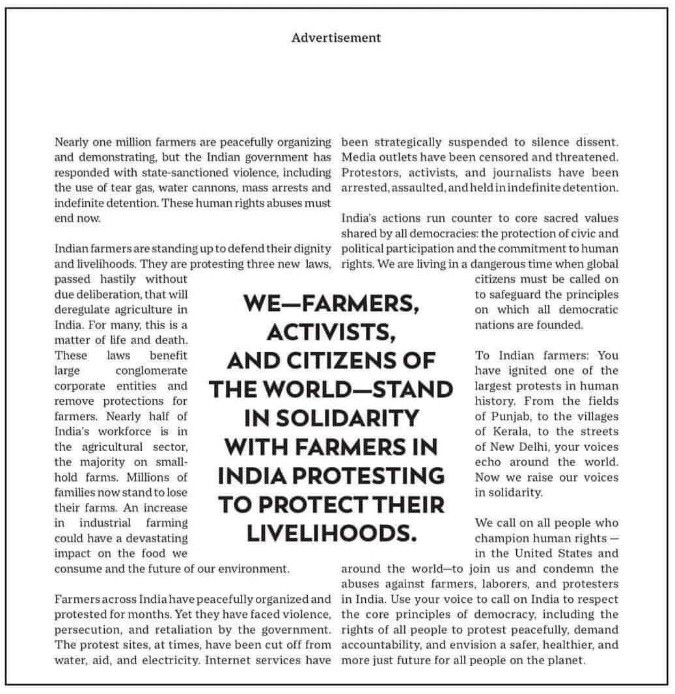 Separately, in an article “Climate Activist Jailed in India as Government Clamps Down on Dissent” by Sameer Yasir in the New York Times (NYT) on February 15, the Indian government’s continuous crackdown on freedom of speech and dissent was criticized.

The article referred to international reports that say freedom of speech in India has declined for a third consecutive year.

It also criticized the arrest of the 21-year-old young activist Disha Ravi for distributing a ‘tool kit’ to garner support for farmers protesting against the new farm laws.

The article stated that the Modi-led BJP government has resorted to blocking the internet and stifling fundamental freedoms in response to its contentious policies against Muslims and actions in Indian Illegally Occupied Jammu and Kashmir (IIOJK).

Mati
Mati-Ullah is the Online Editor For DND. He is the real man to handle the team around the Country and get news from them and provide to you instantly.
Share
Facebook
Twitter
Pinterest
WhatsApp
Previous article“Thought Center” launched for providing analytical writings, researches about Eurasian regions
Next articleUAE and Czech Ambassadors meet Energy Minister Omar Ayub