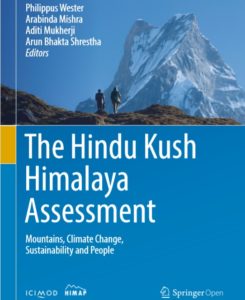 KATHMANDU, Nepal: A comprehensive new study of the Hindu Kush Himalaya (HKH) region has warned that if global climate efforts fail, current emissions would lead to five degrees in warming and a loss of two-thirds of the region’s glaciers by 2100.

The study of the Hindu Kush Himalaya region – which covers 3,500 kilometers across Afghanistan, Bangladesh, Bhutan, China, India, Myanmar, Nepal and Pakistan, and known as the world’s “Third Pole” for its vast store of ice and home to Mount Everest, K2 and other soaring peaks – finds that even the most ambitious Paris Agreement goal of limiting global warming to 1.5 degrees by the end of the century would lead to a 2.1 spike in temperatures and the melting of one-third of the region’s glaciers, a critical water source to some 250 million mountain dwellers and the 1.65 billion others living in the river valleys below.

“This is the climate crisis you haven’t heard of,” said Philippus Wester of the ICIMOD, who led the report.

“Global warming is on track to transform the frigid, glacier-covered mountain peaks of the HKH cutting across eight countries to bare rocks in a little less than a century. Impacts on people in the region, already one of the world’s most fragile and hazard-prone mountain regions, will range from worsened air pollution to an increase in extreme weather events. But it’s the projected reductions in pre-monsoon river flows and changes in the monsoon that will hit hardest, throwing urban water systems and food and energy production off kilter.”

Styled after the Intergovernmental Panel on Climate Change (IPCC) reports, “The Hindu Kush Himalaya Assessment” is the first and most authoritative study of its kind to provide an assessment of one of the world’s most significant, yet often overlooked, mountain regions.

Developed over five years, it includes insight by more than 350 researchers and policy experts from 22 countries and 185 organizations.

With 210 authors, 20 review editors and 125 external reviewers, it provides an unprecedented insight into the region’s distinct environment, people and wildlife.

The rationale for “The Hindu Kush Himalaya Assessment” is manifold. The ﬁrst is about extending the accessible knowledge base. There has been incredible value in bringing together people engaged in generating knowledge about the HKH to collate existing knowledge. Plus, by working across disciplines and countries, the assessment blends insights from different perspectives about the mountains. Global assessments and programmes like the IPCC can now beneﬁt from an important knowledge source about this region, and the book has great value in informing global debates and discourses. Then, there is a value beyond the assessment report itself, in bringing together a network of people who can work across disciplinary and geographical boundaries in the future.

But the main reason for the assessment goes beyond the collation of knowledge. It is to answer a range of policy-oriented questions we all grapple with. Some of these are quite scientiﬁc, such as what will happen with climate change, or what the impact of air pollution is. Others are more targeted to actions that people should take, like pathways to sustainable access to energy, or building resilience. The main objective of the assessment thus is to inform decision-makers with the best science and knowledge we have. This assessment has made important strides in this direction. A very important ﬁnding of the assessment is that while we have signiﬁcant knowledge gaps, we know enough to take action.

“The massive size and global significance of the Hindu Kush Himalaya region is indisputable, yet this is the first report to lay down in definitive detail the region’s critical importance to the well-being of billions and its alarming vulnerability, especially in the face of climate change,” said David Molden, Director General of ICIMOD.

Shreshta was launched by the ICIMOD on Monday in its Headquarters in Kathmandu, Nepal, wherein it also organized the Regional Editors’ Meet.

The launching event of the “The Hindu Kush Himalaya Assessment: Mountains, Climate Change, Sustainability, and People” consisted of multiple sessions, covering discussions on key findings of the HKH assessment report, brief presentations on the key messages from the HKH assessment chapters by coordinating lead authors, and in-depth interactions and interviews with lead authors by media representatives, etc.